The first week of February 1901 found American Fork, Utah with its first case of smallpox. The disease had inflicted the Adamson family. Charles Logie wrote to his daughter, Beatrice, that the students who had not received vaccinations for the disease weren’t being ‘turned out’ of school. Feelings against the enforced vaccinations were still running high throughout the community. Beatrice’s older sister, Elenor and her husband Lorenzo Gaisford were talking about moving to a farm. Census records confirm that they did move to a farming life for a while but eventually relocated to California. Education was always a high priority in the Logie family and Elenor was worried about her children living so far from town that they couldn’t get to school like they did in a town or city. Her parents worried that she would suffer from loneliness and the farming life in a remote setting given her personality.

Beatrice had left her copy of the Articles of Faith home when she moved away and wanted her parents to send it to her. Charles sent her a short note on 9 Feb 1901 saying that they couldn’t find the document in her things that were still at home. The search continued for several days without success but the day was saved when Mrs. Evans visited and brought a copy of the document to send to Beatrice.

Charles mentioned that he and his wife Rosa had enjoyed a church meeting the day before that featured B.H. (Brigham Henry) Roberts and Seymour B. Young, both General Authorities of the LDS Church, as the speakers.

For the past year, Beatrice lived in Bingham Canyon, Utah where she was a school teacher. She moved to Salt Lake City a week earlier to attend additional college courses. Apparently, teachers at the time did not have to sign a contract for a full school year given that she left her teaching position in late January.

This note and letter contain misspellings of certain words that continue through the end of the series of letters. Charles’ health had become a problem by this point in time and perhaps his previously excellent memory was being affected by that issue. His sense of humor was constrained but not lost as will be evidenced in his subsequent letters.

We Send you every thing that you Sent for with the exception of Articles of Faith I asked Bro Grant if he had such a thing & he said no. He 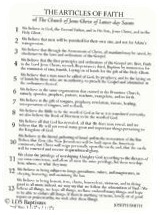 did not Know where I could get one only perhaps the Sunday School might have a spare coppy. Mother says she will see if Mrs. Evans cant get a copy for you & that is all at this time to be continued in the next..

Your letter received we are allways Glad to hear that you are doing well & haveing a good time as you call it. I have not anything Special just now but thought I would write a short note to let you know that we are well & no particular complaints to make. The weather has cleared up - Sun Shining today, but it is pretty cold outside it is kind of comfortable to keep the stove in sight.

Mrs Evans dined with us yesterday & she brought that card with the articles of faith for you which I enclose. We could not find yours. Mother searched every place that she could think of but there was no card to be found & of course she did not look in the right place.

Well we are sailing along pretty smoothly at present as far as the schools are concerned & the health board daresent turn em out but we don't know how long this state of affairs will last.

We have two families got Small Pox - Harry Adamson’s Wife & Son Conder. The report is that poor Jim is the worst looking case in the State but I suppose that yarn is for the benefit of the doc, Battey & Co.

We got a letter from Nellie yesterday & she seems to have the blues. Says that Ren is going to sell out his printing business & going to farming. Nellie says she was out to see that farm one day & that she was glad to get back. Says She won't be able to visit us if they sell 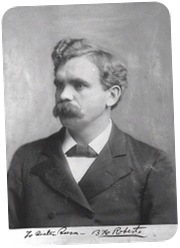 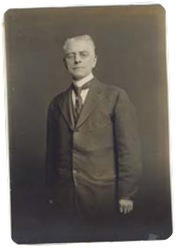 the paper because they will have no pass.

Poor Nellie don't want to be put on a farm away from everybody. She is not adapted to feeding pigs & chickens & milk kicking cows. You might write to her & give her some good advice. Mother says if she moves out on that farm which is some ten miles out of town it is goodbye to the children going to school.

We had a grand day yesterday Bro. Roberts & Seymore B. Young gave us some splendid talk. The house was cramed full & running over. We wish you could have been there. You did not tell us how far you live from your coledge & what amount of lucre you have pay for your board.

You will please excuse impertenery questions.

Well it is dinner time & the fried onions & gravey smell good. Be good to your self.

We send kind Love & Remain … you find no change in me,