Abiel Chandler was born on 20 October 1765 in Andover, New Hampshire to Timothy and Ellizabeth Copp Chandler. Too young to fight in the Revolutionary War at its start, he worked on the family farm in support of his family. 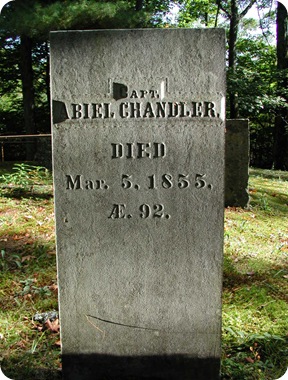 At the age of fifteen, in late 1780, he joined in the battle for freedom as a volunteer from New Hampshire joining Benjamin Whitcomb's Independent Rangers in the place of J. Rosebrooks.  The Rangers primarily functioned as scouts and spies.

By the end of 1783, his military service was completed and he was discharged.  During the war, Abiel was at the battles of White Plains, West Point and Saratoga.

He married Abigail Thomas on 25 Dec 1788 in New Hampshire and they had eleven children. One of the sons was named George Washington Chandler in honor of the great leader of the Revolution.  For the remainder of his life, continued to serve in the New Hampshire militia, eventually rising to the rank of Captain.

Both the Chandler and Thomas families had lived in New Hampshire since the late 1600’s.  Their ancestors were known for their strong character and homesteading spirit. They often chaffed under the reign of Mother England over the American Colony.  The spirit of freedom was exhibited in his father-in-law, Sergeant Jonathan Thomas, who also a Revolutionary War veteran.

The Chandler men were known for their physical strength.  Abiel’s great grandfather, John Chandler(2) actually threw several English soldiers into the deep foundation of a home when they tried to impress him into British military service.

Their desire for personal freedom prompted them to serve in local military groups in protection of their villages and towns. Three of his Chandler ancestors were also Captains in the local militia in New Hampshire.

John was the second son and child of Captain Thomas and Hannah (Brewer) Chandler. He was born 14 March 1655 and died in Andover, on 19 September 1721 age sixty seven. He was a blacksmith and landholder. His homestead was on the west side of the Shawshin River in Andover. He was elected selectman on 6 March 1710, to which office he was several times re-elected. He was first selectman in 1715, and subsequently highway surveyor. He married Hannah Abbott, third child of George and Hannah (Chandler) Abbot, of Andover. She was born 9 June 1650 and died 2 March 1741 aged ninety. John was also made a Captain in the militia.

John was the second son and child of Captain John and Hannah (Abbott) Chandler. He was born 14 March 1680 and died on 3 May 1741 in Andover. He was a farmer in West Parish, on "the Chandler Homestead." He was surveyor 1716-1720; selectman 1720, chosen as selectman to oversee the poor 1725-26-28. He was chosen a trustee of the town, to take out of the Province Treasury "their aforesaid part of 60,000 pounds."  At one time in his life, as he went to Newburyport, he was impressed by three of the kings officials, saying to him, as they laid their hands on his shoulder, "the King needs your services; you will go with us."  Apparently yielding, he walked quietly along until they reached a spot where a house had been burned and where there was a deep cellar with ashes and half consumed timbers still burning, then turning round quickly, he seized them, one by one, and threw them all into the cellar, where he left them and went his way.

He married Hannah Frye on  4 June 1701. She was born 12 April 1683 and died 1 August 1727 aged forty-four years. She was the daughter of Samuel Fry and his wife Mary, daughter of Robert Frye and his wife Ann. Ann Frye died in Andover on 23 October 1680 and was the great granddaughter of John Frye, of Basing Hants, England.

John was the eldest son of Captain John and Hannah (Frye) Chandler, born in 1702 in Andover, Massachusetts.  He died in Concord, New Hampshire on 26 July 1775 aged seventy-two.  He has one of the original proprietors of Concord, New Hampshire and a man of much influence.  In 1733, he was tithingman and treasurer of Pennycook, New Hampshire. In 1746, he was captain of the garrison round the house of Rev. Timothy Walker.  Captain Chandler was a man of great muscular power and a great wrestler.  It is related "that being informed that Rev. Mr. Wise, of Ipswich, excelled in the art of wrestling, and had not been thrown, he made a journey on purpose to try his strength and skill.  Mr. Wise on being requested, declined, having relinquished the practice as unsuitable to his profession.  But being earnestly solicited by Mr. Chandler, they went into a door-yard which was fenced by a wall set in the bank, took hold, and began to play; when Mr. Wise suddenly, with a trip and a twitch, threw him over the wall upon his back. Chandler arose and requested another trial, but Mr. Wise refused.  So the Captain returned home sadly disappointed."  He married Tabitha Abbott, daughter of Nathaniel and Dorcas (Hibbert) Abbott.

Thomas was the second child of William and Annis Chandler and was born in 1628. He died "15 day 1703".  He was one of the early pioneers in the settlement of Andover, and was employed with George Abbot Sr. and others to lay out lands granted individuals by the general court.  Lorings "History of Andover" says: "Thomas Chandler was a blacksmith, ultimately a rich man, carrying on a considerable iron works."  Thomas married Hannah Brewer of Andover.  She died in Andover, 25 October 1717, aged eighty-seven.  Thomas was made a Captain in the militia and served as representative to the general court in 1678 and 1679 from Andover.

William and his wife, Annis, emigrated to Roxbury, Massachusetts in 1637.  Annis is supposed to have been a sister of Deacon George Alcock, of Roxbury.  He took the freemans oath in 1640, and was at that time stricken with disease which caused his demise on 26 November 1641.  He was among the proprietors of Andover, with his son Thomas, and tradition says he was the owner of the tannery at the corner of Bartlett street and Shawmut avenue, Roxbury.  He had consumption for a year before he died.  A chronicler of his time says he "lay near a yeare sick, in all which time his faith, patience and Godliness and Contentation so shined that Christ was much glorified in him -- He was a man of weake parts but excellent faith and holiness; he was a very thankful man, and much magnified Gods goodness.  He was poor, but God prepared the hearts of his people to him that he never wanted that which was (at least in his esteem) very plentiful and comfortable to him -- he died in the year 1641 and left a sweet memory and savor behind him."

The young couple settled in Sanbornton, moved to Bridgewater, now Bristol, in about 1796, where he filled his service as Captain of the militia.  They had a farm on the hills in the northeast part of the town.  Eventually, they moved to Stewartstown, New Hampshire, living on North Hill and then on the David Kent place.  While in Stewartstown, he was chorister.

After their family was raised and Abigail had passed away, he moved back to Bristol to live with his son, Timothy.  He died at his son’s home on 5 March 1854, in his 89th year even though his tombstone states that he was 92.

Abiel’s Revolutionary War pension application has provided the majority of our knowledge about his life.  His descendants are fortunate to have a document of such antiquity that details the names and ages of his family members, occupational difficulties and struggles in his hand or as transcribed by his solicitor.  He and Abigail successfully raised a family of eleven children, of which two died as babies. 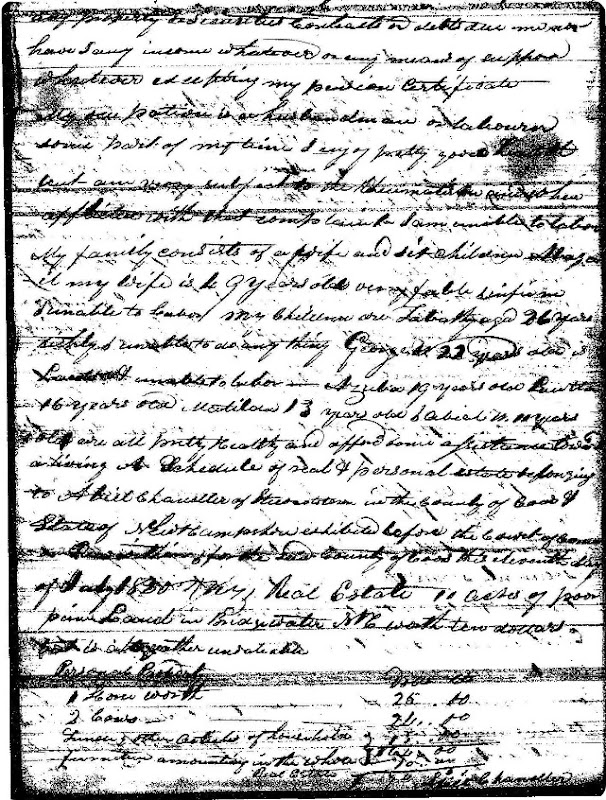 Unfortunately, arthritis or rheumatism crippled Abiel when he was in his mid-40’s.  The debility severely impacted his ability to provide for his family.  His children helped on the farm and in various jobs in their community to help support the family.

The extremely protracted process of obtaining a military service pension is detailed in his application.  His experience was typical for Revolutionary War veterans.  Many of them died long before their pension was approved.  The meager pension payments were frequently obtained by their widows after yet another extended application process.

Of interest to his descendants, his pension application includes a discharge of service certificate signed by General George Washington. 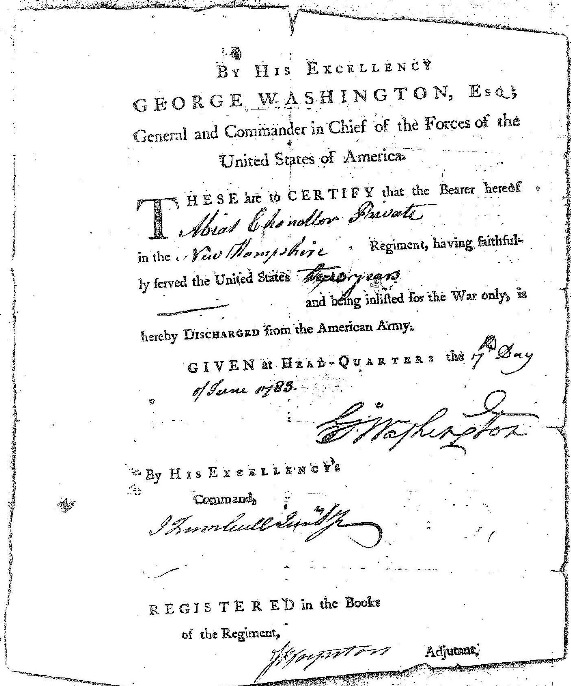 Sources for his story are located on my FamHist website.

What an wonderful memorial to your ancestor. My husband is also a descendant of Thomas 1627 Chandler by his son William who moved to Westford, MA. He too has a Rev. War soldier who was too young to fight in the beginning of the conflict. He did however take his brother-in-law's musket and head for the fight at Bunker Hill. He, Moses, went on to join Ethan Allen. He was given bounty land in Farmington, Maine and settled there in abt. 1790.
Are you aware that the Thomas 1627 Chandler homestead is still standing in Andover, MA? It is privately owned so cannot be visited but can be viewed from the outside.