Panned Out Today. Got Eleven Dollars.

The season of placer mining in David Drew’s life was coming to a close by September 1856.  He was barely making enough money to satisfy debts and sustain life.

His days of living exclusively along the rivers in the Stanislaus were numbered although it would be years before he fully abandoned his quest for gold.  As expected, his diary entries for September 1856 are brief, hurried entries.  The spelling is frequently ‘off’ a little.  His enthusiasm for this lifestyle was definitely waning.

MONDAY 1, --Received a coupple of letters from farther and one from Fred A. Drew. Wrote to farther this eavening. 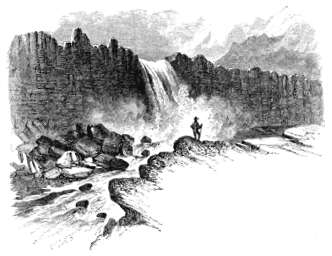 TUESDAY 2, -- Commenced striping on our out side piece. My horse fell off the bank to night and came pretty near brakeing her neck.

Kate, of course, is Drew's horse.

THURSDAY 4, -- Set up sluice and got ready for washing.

FRIDAY 5, -- Commenced washing this morning.  Jackee Stevens paid us a visite to day.

SATURDAY 6, -- Went a guning this afternoon but did not see any game.

SUNDAY 7, -- Staid at home to day for the first Sunday in a long time.

MONDAY 8, -- Our ground has not pay very well.  Only got eleven dolars in a day and half.

TUESDAY 9, -- Kates shoulder is a getting along first rate.

WEDNESDAY 10, -- Paned out to day and got eleven dolars in three days.

THURSDAY 11, -- Have got tired of mineing.  Think that I shall sell out the first chance and try something else.

The entries have been getting more laconic and every now and then David skips an entry. He is discouraged, for the claim seems to be playing out, the speculations are not doing well, and after four years of hard mining, the grass looks greener elsewhere. But he had the mining fever in his blood, and he continued mining, off and on, for another fifteen or twenty years along the Stanislaus or close by.

FRIDAY 12, -- Paned out again to day, and come to the conclusion that it will hardly pay to work.

SATURDAY 13, -- Len and George went up the hill this afternoon.

MONDAY 15, -- Cut wood a little while this morning and then went up the hill and hauled some hay down.

TUESDAY 16, -- Finished hauling down our hay and then went sawing wood.

WEDNESDAY 17, -- Went at work a triping off another pit to day.

SATURDAY 20, -- Washed out to day and got ten dolars for three days washing.

MONDAY 22, -- Went up on Shaws flat this forenoon.

TUESDAY 23, -- Went up to French Camp to find some poles too put up our floom with.

French Camp was on the South Fork about four miles above Pine Log Crossing.

THURSDAY 25, -- Finished washing.  Was not very well this forenoon and did not work.

SUNDAY 28, -- Stoped up in Columbia last night.  Took a ride down on the Flat this forenoon.

MONDAY 29, -- Commenced putting up our fluming.

TUESDAY 30, -- Len went up the hill this forenoon to get our level fixed.

Went To The Circus in Columbia

David Lewis Drew’s quest for gold and a bright future continued to dwindle by August 1856.  The hard labor by he and his partners was not rewarded with few golden flashes in their flumes.

Accidental deaths in the gold fields still occurred from time to time.  David noted the death of Harry Richard in his diary entry of Tuesday, 19 August 1856.  His diary entries continued to be shorter than those earlier in the year.  He even began to skip entries for several contiguous days.

We enter David’s world with the not that he had written a letter to his father, David Drew, back home in Plymouth, Massachusetts.

SATURDAY 2, -- Went to Sonora this eavening to a political meeting. 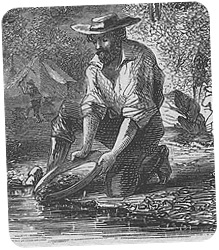 MONDAY 4, -- Len and George are sick today. George and myself went up on the Flat this afternoon.

TUESDAY 5, -- Got some lumber on to the hill this afternoon.

WEDNESDAY 6, -- Went to haulling lumber this morning haulled one load and then give it up.

FRIDAY 8, -- Went up to Columbia this morning after barly. Made up some boxes this afternoon.

SUNDAY 10, -- Went up to town this forenoon. But soon got tired and came home.

MONDAY 11, -- Commenced setting up our tail race this morning.

TUESDAY 12, -- Washed a little this forenoon and finished puting in our tail race this afternoon.

THURSDAY 14, -- George Colingwood was down here to day.

FRIDAY 15, -- Have to shovel tailings now there is not watter enough in the river to carry them off.

SATURDAY 16, -- Wrote a letter to William Keene to day.

MONDAY 18, -- George went up this evening after papers.

TUESDAY 19, -- Harry Richard died yesterday. He was hurt by a timber falling on him. A week ago today.

SATURDAY 23, -- Nothing worth mentioning transpired this last three days.

MONDAY 25, -- Len is sick to day and did not work Went up the hill this afternoon after some hay.

TUESDAY 26, -- George and myself went up the hill this afternoon and hauled some hay down.

WEDNESDAY, THURSDAY, AND FRIDAY. -- no entries.

SATURDAY 30, -- Went down to Jimtown to day to attend the know nothing tunnel meeting.

SUNDAY 31 -- Stopped in Columbia last night and went to the circus. Took a ride to Sonora. David Lewis Drew’s diary entries in July 1856 were brief. Apparently, he and his partners were not having much success in their quest for gold because he didn’t include a single comment about their earnings during the month.

His enthusiasm to enter more descriptive diary entries was obviously on the wane. After several years in the intense quest to find his fortune in the California gold fields, the dream was dying.

Campaigning for the Presidential Election of 1856 had arrived in Calaveras County. On Saturday, 26 July he went to Columbia to hear the campaign presentations for all three of the presidential candidate. In later diary entries, he revealed the candidate and political party that most closely matched his own ideals and beliefs.

We enter July 1856 with David’s two partners putting an addition on to their ‘house’. A stick-built room on their combination tent / shanty must have been welcome.

TUESDAY 1, -- Len and George put on an additon to our house.

WEDNESDAY 2, -- Haulled down six hundred feet of lumber and packed home the Walker Co boxes Finished the house this afternoon.

This entry is one of the most compelling statements placing the location of the river claim at Walker's Bar.

THURSDAY 3, -- Went up to Columbia this morning after nails Comenced puting in our too inch boxes to day.

FRIDAY 4, -- Went to sonora to the celebration. but it rained a part of the fore noon and spoilt our fun. Went to a ball in the eavening at Capt Bartletts.

SATURDAY 5, -- Took a ride up in to the mountings this forenoon to see the country. We had a splendid view of the plains and the mountains back.

Jamestown was called Jimtown by the miners.

MONDAY 7, -- Went to work this morning a makeing boxes.

TUESDAY 8, -- Went up to Columbia this morning after nails. Mosher was down here today.

WEDNESDAY 9, -- Went to caulking boxes this forenoon. in the afternoon commenced setting sluice.

THURSDAY 10, -- Haulled some lumber down this morning.

MONDAY 14, -- Finished setting boxes to day. I made up three awnings today.

TUESDAY 15, -- Got to washing this afternoon.

WEDNESDAY 16, -- Got a letter from Harry to day. and answered it.

THURSDAY 17, -- Went up to Columbia to day and got a letter from William Keene.

FRIDAY 18, -- Pretty warm to day got a lot of papers from Harry today.

“Harry” was his brother, Harrison Warren Drew of Plymouth, Massachusetts

SATURDAY 19, -- Paned out today got rather a small weeks work.

MONDAY 21, -- George was not very well today and did not work.

TUESDAY 22, -- Business looks brisk down here now the claims are about all opened.

THURSDAY 24, -- Mr. Card was down here to day and stopped and took diner with us.

SATURDAY 26, -- I am going up to Columbia this evening to attend the ratification meeting.

There were three presidential candidates involved in the election of `56. The strong Democratic party had nominated James Buchanan for president. The American (Know Nothing) and Whig parties had united behind ex-president Millard Fillmore, and the ratification meeting on July 26th was called by "Friends of Fillmore." The newly organized Republican party had nominated the "Pathfinder", John C. Fremont, as their first presidential candidate. The somewhat biased publisher of the Sonora Union Democrat expressed his opinions of the situation thus: "MORE FOLLY --All around we hear of ratification meeting of the Republicans and rejoicings, fireworks, etc., in honor of Fremont. In the course of next month it looks as though $100,000 would be spent in gun powder and flummery. All this is mere folly and nonsense. If the Republicans and Americans can be awakened to a sense of their forlorn condition and ridiculous chances, let them unite for a grand movement; otherwise the game is lost, and the less powder they burn, and the less noise they make, the better it will be."

Wrote To Farther This Mail

Life in the Calaveras County gold fields continued to sustain life but not be very profitable for David Lewis Drew in June 1856. Summer had arrived and it was hot. One of his partners left the fields to go back home to Plymouth, Massachusetts for a visit.

David notes that he wrote a letter to his ‘farther’ on the 14th. I first thought he’d accidentally spelled ‘father’ wrong when I initially encountered this spelling, but have found that he consistently spells it the same way throughout his diary.

SUNDAY 1, -- Went up on Shaws Flat to day. George H. Haskins came down to go to work for White.

WEDNESDAY 4, -- Jim Marks commenced work on his claim to day and took our water. 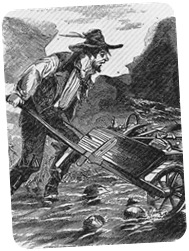 THURSDAY 5, -- Commenced to work nights last night do not like it very well.

It was necessary to work at night because Jim Marks, upstream, was using all the water in the ditch during daytime.

SUNDAY 8, -- Been out all day looking for our horses found them about three oclock this afternoon. heard from White today.

MONDAY 9, -- Went up to Columbia this forenoon.

TUESDAY 10, -- Shifted sluice this afternoon. Gorge went up on the flat to day.

WEDNESDAY 11, -- Begin to like night work better get clear of the hot sun.

THURSDAY 12, -- Hot day to day the hottest that we have had this season.

FRIDAY 13, -- The river is running down fast it will be down in the course of a fortnight.

SUNDAY 15, -- Took a ride to Sonora to day and came back through Shaws flat.

MONDAY 16, -- Uncle Pell, Mr. Pierce, and Nathan Churchill were down here to day to look at there claim.

WEDNESDAY 18, -- Went up the hill to day to get some barly paid 5 per pound Got states papers to night.

"States" was an expression used for a number of years after California itself became a member of the Union. It poignantly indicates how far away the east seemed to Drew

FRIDAY 20, -- River is down pretty low now. can wade accross it any where.

SATURDAY 21, -- Reed commenced this week to dig a race for his flooming.

MONDAY 23, -- Did not go to work this morning not being very well.

THURSDAY 26, -- Had to give up washing to day. the (river) has run down so low that we can not get the watter into the boxes.

FRIDAY 27, -- Went up to the doctors this afternoon and got my jaw lanced. which made it feel easyer. Uncle Pell and Co come down to day.

SUNDAY 29, -- Took a ride up to Streets big resevior to day. It is a splendid piece of work.

This reservoir was built by a company know as Shaws Flat & Tuolumne River Water Company, in Sullivan's Creek, four and a half miles east of town

MONDAY 30, -- Commenced puling in boxes from the spring.