I Went and Played the Musical Instrument

Charles Logie’s letter to his daughter Beatrice on the 1st day of January 1901 reflected on the passing of the century and of the ongoing concern of forced vaccinations for diphtheria and smallpox in Utah.  He reported that the majority would not allow their children or themselves to be vaccinated.

Charles reported that the temperature was down to zero.   Years earlier, American Fork City had employed him to make the first flag pole in town and bell mount in the city park.  From that point in time on, he continued in their employ as 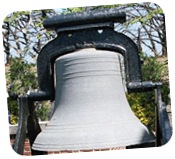 the official bell ringer.   That work involved ringing the bell for special occasions and every night for curfew.

Thirty plus years later, he rang in the New Year, noting that he had left home to play the ‘musical instrument’ for the midnight hour only to return home and find his wife fast asleep.

The letter states that their boarder, Miss Gailbraith, was ill and had lost her kitten.  Miss Gailbraith’s visitors and the topics of their discussions are frequently mentioned in his letters.  She proved to be a source of income and entertainment for Charles and Rosa now that all of their family had grown and moved away.

He closes his letter mentioning his prized gold pen that he used to write letters over the years.

We received your extremely welcome letter this morning and was much pleased to find that piece of dirty paper that you kindly enclosed. We are sorry to hear that you were unwell while you were in the city for you could not have a good time if you were sick. But we hope that you have recovered by this time & that Richard is himself again.

I suppose you have not been vaxinated yet & we think you had better wait & see how the courts decide in the matter for there seems to be that the majority of the people will not submit to have their children vaxinated. These settlements have concluded to open school on next Monday & will not debar any healthy student & teacher from attending. 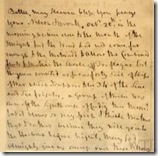 Laura Boley was over last night & said that she felt quite sick & wondered why you had not written to her She had a talk with Miss Galbraith & asked her if she would be willing to give her some lessons in Greek & Latten for she did not know weather she would go to school in Salt Lake any more this winter.  Miss Galbraith told us that she thought Laura had better not try to the Greek for its required, a good deal of hard study to learn Greek but she thought a little Latin might do her good.

We got a letter from Walter the other day it was quite a master piece.  He said he though he  would answer all my letters at once thanked you & Mother for those presents & that has well but did not know when he would come home.

The dame says that she wants you to weare more clothes she thinks you aught to put on an extra shirt than you do when you are down home & for you to try to keep warm & not take cold if you can help.  There are quite a few people here that are complaining of having a cold.  Even our old & trusted friend Miss Galbraith is somewhat under the weather especially since she has lost her Kitten.

We are having quite a cold spell these last few days. The thermometer nearly goes down to zero. Have not learned any thing of the masquerade believe there was not much to it.  Me & the Mother sat up last night to welcome the new year in I went & played the Musical instrument, (the bell) at the Midnight hour & returned home to find my loveing pardner in bed & thus ended the Grand old Ninetenth Century as far as we were concerned.

I wrote a letter to Nellie yesterday expect to write to Walter tomorrow I am running the gold pen for all it is worth.

Lee - I found your blog recently and wanted to let you know I've awarded you with the KreativBlogger award! You can go to my website to get the info! I really like the way you weave the stories with the letters!
Wendy
http://allmybranches.wordpress.com

I've given you the KreativBlogger Award - visit the Mt. Timp Graveyard Rabbit to claim your award! (www.mt-timpgraveyardrabbit.blogspot.com.) Looks like you got a double dose!

I recently came accross your blog and have been reading along. I thought I would leave my first comment. I dont know what to say except that I have enjoyed reading. Nice blog. I will keep visiting this blog very often.