My 2nd great grandfather, David Lewis Drew, left his comfortable home in Plymouth, Massachusetts to make his fortune in California during 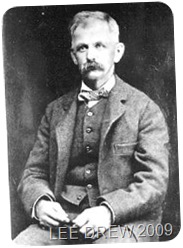 His descendants are very fortunate because he kept a diary of his daily life in the gold fields for the year of 1856.   His total profits by the end of the year were basically negligible but he had proven to himself that he could enter into numerous business ventures and survive the encounters.

The diary entries will be posted here in twelve installments covering the months of 1856.   Comments have been added to support the entries by Gerald Drew Turner and Bill Fuller of Calaveras County.

Over the years, it has been interesting to hear from descendants of most of the individuals that David mentioned in his diary.  Perhaps the memory of the unique events in the gold fields has been passed down to us through our DNA.  Whatever the reason, we seem to come back to the story over and over.

We enter 1856 with David’s visit to Springfield, California in an effort to settle mining debts.  All of his original spelling is intact although it doesn’t necessarily represent his Plymouth education.  When tired and living in a tent, sometimes the spelling in a small diary suffers.

The Diary of David Lewis Drew

TUESDAY 1 -- Went up to Sprinfield to try and settle up with Sinclare. did not come to any understanding Wrote to Charles Wadsworth 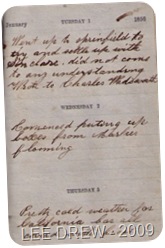 We know nothing about Sinclair, and have no clue as to what the business to be settled was. Springfield was about a mile southwest of Columbia, on upper Mormon Creek. It was first known as Tim's Springs or Tim's Garden. At the time of Drew's diary it was a large camp. At its peak, some 600 miners were registered to vote there. A post office was established in 1857. Ten years later the camp had declined and only 60 or so miners remained, and the post office was discontinued the following year. Charles Wadsworth was one of David's friends back in Plymouth.

A flume was a structure generally constructed of wood though sometimes of canvas, and even sometimes of rock and dirt, to provide a temporary channel for the river water, or in the sense referred to here, to provide a source of water to a set of sluce boxes. Jim Marks, who had been working upstream from Drew, was and Englishman. He was naturalized in Tuolumne County just the previous October.

FRIDAY 4 -- White went up to settle with Sinclare made arrangements to pay him $150. went to Jim Town to buy Grovers interest at auction Found it sold. received a letter from mother.

A.H. Grover was a mine in Jamestown, from Missouri. Jos. Cartwrite appears in the archives as a juror on an inquest at Robinson's House, near Sonora, on January 24, 1857.

MONDAY 7 -- Raised our boxes Got about two foot more fall. this evening commenced the history of England by Hume

THURSDAY 10 -- Rained in the morning About ten oclock went to work. This evening commenced the life of Franklin

FRIDAY 11 -- Looked rainey but cleared up about night

SATURDAY 12 -- Finished dich and set boxes and got the watter in Found the dich too high. the dich broke away about night 6

Notice how much trouble Drew has with the problem of sine versus double consonants. He used capital letters sparingly, but always at the beginning of an entry.

SUNDAY 13 -- Wrote to Farther and sent the orders back. Went up on the flat Found the flumeing all done on the new claim Thought that they would get to washing by Wednesday

Sunday was rigidly observed in the mines as a day when no work was done. It could be spent going on short trips, visiting, or just staying around the cabin, washing clothes, reading, or engaged in other similar occupations. The new claim refers to the fact that Drew "Bought of Julius Stetson his interest in a claim near the Niger Claim Shaws Flat, in Company with G.H. Haskins, A Pierce, R B Bartlett, paid one hundred and twenty-five dollars the said interest being one forth of the whole" on November 26th, 1855. He was thus obligated to either work or pay for the work represented by his share (one-twelfth). Since he was busy down on the river, he chose to pay. Stetson, Haskins and Pierce were all Massachusetts boys, listed at Shaws Flat. Captain Robert Bartlett, who also appears later in the diary, was not listed in the Directory of 1856.

MONDAY 14 -- Raised our boxes and went to diging dich

TUESDAY 15 -- Finished the dich Rained a little in the afternoon

THURSDAY 17 -- Got the water on after we finished raising the sluces and lowering the dich a little. had been to work a few minits when a couple boxes came down, put them up and lowered the dich 6 in

We are uncertain at to the precise meaning of "drift" as used by Drew. It could mean a short tunnel into the pay dirt, or it could refer to an open trench down into the ground.

SATURDAY 19 -- Received a letter to day from William Keene, worked all the fore noon Thought that we had done pretty well not haveing any tumble downs. just at noon part of the dich and one of the drifts caved in.

We don't know who William Keene was, but assume he had been a close friend of David's at Plymouth.

SUNDAY 20 -- Went up on the flat All complaneing of dry times up there. Got James Stetson to sell our share in the New York tunnell paid an assessment of eight dolars on the tunnell raines a little this evening

White, Covington and Drew bought a one-twentieth interest in the New York tunnel for $66.87 on September 29th, 1855. This tunnel was being driven under Table Mountain below Peroria Bar, above the workings of the Stanislaus Company, and below the St. Lawrence Company. Up to January 1st, 1856, they had paid $47.50 in assessments. Assessments were the cash payments required by the owners of an interest or share if they were not available to work their share. This was the origin of assessable stock, so widely used later in western mining incorporations. If you failed to pay your assessment, you lost your share, for it reverted back to the company.

The tunnel was incorporated on May 4, 1857, as New York Company, with Drew, Julius Stetson, Robert Bartlett, and Nathan Churchill, all among the incorporators. There were many other companies driving tunnels under the long Table Mountain, and most of these proved to be failures. James B. Stetson, who was also from Massachusetts, apparently did not sell the share. Stetson served as constable of Shaws Flat and his trade was that of a tinsmith. 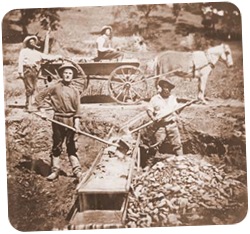 MONDAY 21 - had three brake downs to day. But we got off a pretty good piece of dirt.

Dirts is used in the sense that "muck" is underground; that is, pay dirt or ore. On the river, dirt was apt to be a mixture of sand, gravel, and soil or fines, but, every miner hoped, carrying particles of gold.

TUESDAY 22 -- Rained pretty much all day. Held up a little while in the afternoon and we sowed some barley for feed. Mr Covinton and my self think of buying a couple of horses.

WEDNESDAY 23 -- Showery to day found the dich caved in three or four places this morning took us all day to dig it out. the river was pretty high and floated off some of the boxes. hauled some lumber out of the river after diner.

THURSDAY 24 -- Clear weather to day set up our boxes and got the watter in and filled the drifts full of watter to cave them down. did not do much this afternoon.

FRIDAY 25 -- Was not very well this morning and did not work in the fornoon. Worked a little while in the afternoon

SATURDAY 26 -- White went to Jamestown to day to attend the meeting of the know nothing Company. paid an assessment of one hundred and forty dolars. washed this fornoon this afternoon shifted sluce.

On October 20th, 1855, the river partners "Both fours interests in the K N tunnel paid $12.00 the said interests being four twelfths of the whole. the said tunnel being located in Table Mountain about a mile and a half below James Town. Assessments up to Jan 1st 56 $407.87" Drew refers to this s speculation both as the "K N tunnel" and the know nothing tunnel:. The name was taken from the nickname of the popular American political party.

SUNDAY 27 -- Went on the Flat. had been washing a little and the new claime did not pay very well. Thought of trying it another week and see if it would do better.

MONDAY 28 -- Took until half past ten to get the watter on. washed until noon. rained this afternoon. so that thought it best to pull the boxes out. just after diner a couple of boxes tunbled down

TUESDAY 29 -- Put up our boxes and got the watter on and washed until most night and then shifted sluce. thought that we had done pretty well to day. got along without any brake downs

WEDNESDAY 30 -- Have not worked more than at washing to day been bothered like the devel. had a few short showers to day.

THURSDAY 31 -- Have got along first rate to day have not been bothered any. got off a big piece of dirt White went up to Columbia to get some hose to try the hydraulic power. finished the bible to night.

Hydraulic power refers to the use of water under pressure, and sprayed out of a nozzle onto the dirt, breaking it up and washing it into the sauce boxes.