Abram was also known as Abraham in many records and among his family.

Abram was a veteran of the Civil War.  He married to Rachel Anderson June 30, 1839. The couple had eleven children; eight boys and three girls.

At the time of his death on 11 March 1906, seven were living; five boys and two girls; George, of Warsaw, Missouri, Silas and David, of Mercur, Utah, Robert of Alpine, Utah, Charles, of Valentine, Nebraska, Mary Camp, of Kirwin, Kansas; and Mary Downing of Colorado Springs, Colorado.

He first came to Kansas from Ohio in 1856 with General Jim Lane and later brought his family to Doniphan County to live.

Abram served as the Chaplin of a Kansas regiment of militia and was for several years very active in church matters.  He was appointed as the Kickapoo Indian Agent by the President of the United States after moving to Kansas.  Later, Abram was elected as a Kansas State Representative and State Senator.

For fourteen years he was a minister of the gospel and assisted in the organization of several churches in this part of the country among which was the M. E. Church in Troy. At the time of his death, he was a member of the Lutheran church.

He was a member of the company that organized the town of Moray and was its first merchant.

His funeral services were conducted at the Moray church at 2 p.m. on Thursday, March 15, 1906 by the Rev. J. B. Vernon and his body was laid to rest in the Moray cemetery, southwest of Troy.

Cuthbert Featherstone served as the Gentleman Usher to Queen Elizabeth I, and as such was her trusted friend. Cuthbert and his wife Katherine lived in London but the housing conditions in the city were poor and they eventually left their home in Chancery Lane. They purchased “Hassingbrook Hall”, an ancient manor near the banks of Hassinbrook at Stanford-le-Hope, twenty-five miles down stream from London. Their ability to purchase this estate indicates they had some measure of financial success. 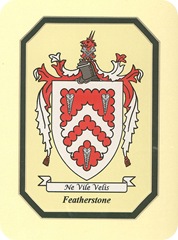 Cuthbert and Katherine had five known children. One of them, Henry, married (1) Mary Newman and (2) Katherine Heneage who was a descendant of one of Queen Elizabeth’s financial advisors and ministers, Sir Henry Henage. Their son, Heneage, began amassing the Featherstone fortune.

In February 1665, the plague began to claim thousands of lives in London. By September of that year, over almost one third of the 350,000 residents had died as a result of this dire illness. On the night of 12 September 1666, a fire started in one of the homes in the London wall. After burning for several days, it destroyed 395 acres of London and consumed over 13,000 homes. More than half of the population was left homeless.

The city was decimated by the plague and then by the horrendous fire. One person had a vision of the future that detailed a brighter future. Sir Heneage Featherstone, was a bright man, who had inherited his ancestors ability to handle money as well as his name. At the time of the fire and plague, he was 38 years of age and decided to start investing in the rebuilding of the city. His investments in reconstruction that leveraged his governmental contacts and skills started in the Old Fish Street and Finsbury Circus areas of the city.

The reconstruction breathed new life into the city and his wealth began to grow rapidly. When looking for the lost fortune, one must look at the land titles involved in this redevelopment effort. Land was not owned in what we now call fee simple, or out-and-out ownership. Rather, the land was owned by a party (often the crown) who leased it out for a stipulated period. These lease periods ranged from a few years or might extend to 999 years! Possibly some of the valuable lands may still legally be in the name of Sir Heneage Featherstone.

Sir Heneage and his wife Mary had ten children, the oldest of whom was Henry, born in 1654. Sir Henry grew in London witnessing the plague and fire and the rebuilding and growth instigated by his father, Sir Heneage. After his post-graduate studies he worked in investments and tenant properties and became fairly wealthy in his own right. Sadly, his wife, Anna Maria Williamson died with her unborn child in 1692. Sir Henry had inherited the wealth and properties of his father and added to them but did not have an heir for his vast estate. Many of his siblings were dead and he was childless. Looking about for another Featherstone willing to apprentice to him and become his heir, his eyes landed on Thomas Featherstone of Heatherye Cleugh from whence his great grandfather Cuthbert had migrated 150 years earlier.

Thomas came to live with Sir Henry, but his love for a local lass, Sarah Caine, overcame his loyalty to Sir Henry and he returned home. You can imagine the old man’s grief. He was 66 and had nor heir for the fortune who would protect the funds and continue to expand the influence of the family.

He looked back to Heatherye Cleugh again and this time found another possible heir in Matthew Featherstone who lived in the Featherstone Castle. Matthew was once High Sheriff of the North Country city of Newcastle-upon-Tyne, and later served as the city’s Lord Mayor. Matthew was wealthy in his own right and had bought the castle back from the Earl of Carlisle.

Matthew descended from the same Heatherye Cleugh branch of the family that had produced Cuthbert the Elder and, almost too good to be true, had a son named Matthew who was of the right age to be an apprentice and heir for Sir Henry.

Young Matthew was born in 1711 and was in his early thirties at the time he moved to live with Sir Henry. In Sir Henry’s will, dated 22 Feb. 1745, with two codicils attached, Sir Henry disposed of some £20,000 in smaller legacies to relatives and various charities but left the majority of his accumulated wealth to his “ … esteemed friend Matthew Featherstone…of Crooked Lane, London.”

There are varying accounts of the total value of Sir Henry’s estate. May stories list it as £400,000. Yet there are persistent stories about immense properties in Essex and London that paled the initial assessment. Among the most believed is that the total estate came close to £16,000,000!

How much was the British Pound Sterling worth in the year 1746? If we take the word of American historians Will and Ariel Durant that British Pounds Sterling in those days roughly equaled fifty U. S. dollars, the sum total came to something like $800,000,000! And that was in 1746, many years before there were any U. S. dollars!

Matthew decided to live in the south of England and bought himself a title. On 24 December 1746, Matthew married Sarah Letheuiller. Sarah and Matthew purchased Uppark, which lies on the South Downs of Sussex in 1747. Sarah oversaw the expensive repairs to the old mansion and their son, Sir Harry was born there on 22 December 1754. Sir Matthew died on 24 March 1744 and Sarah died in December 1788.

Sir Harry was one of the wealthiest young men in England and was highly sought after by the young ladies and their mothers across the country. He continued adding to Uppark’s furnishings and grounds over the years. Sir Henry remained a bachelor until 12 September 1825 when he married Mary Ann Bullock, the daughter of of Uppark’s poulterer and park keeper. He was 71 and Mary was 20 at the time.

Sir Harry sent Mary to Paris to be educated and took Mary’s little sister, Frances, into Uppark as one of the family. It was thought that she might have been his illegitimate daughter. They lived a harmonious and happy life until Sir Harry’s death at the age of 92 on 24 October 1846.

Lady Mary Featherstone(haugh) continued to live at Uppark until her death in January 1874. The estate passed smoothly to her sister Frances who adopted the name Feathersonhaugh and lived on in the house. She arranged for her heir to be Colonel the Hon Keith Turnour. His son passed away before the Colonel and arrangements were made that Uppark should pass to the second surviving son of another friend and neighbor, Admiral of the Fleet the Earl of Clanwilliam. This was the hon. Herbert Meade, a young navy man of 20 who ultimately reached flag rank after a career of high distinction. Col. Turnour assumed the additional name of Fetherstonhaugh and lived at Uppark for thirty five years.

In 1954, the National Trust took over guardianship of Uppark as it has so many of England’s stately hold homes. In the late 1980’s, workmen under contract to repair the roof left a small fire burning while they downed tools for tea on the lawn. A blaze quickly spread and soon there was damage estimated to cost £20 million to repair. Uppark was not destroyed but it had taken body blows from which it would be difficult to recover.

The National Trust has performed heroic measures in restoring Uppark. It reflects a valued time in history and a remarkable recreation of the impeccable tastes and insights of that equally remarkable family of Featherstones.

Source: “The Featherstones of England”. by Elizabeth and Hans W. Meier

Technorati Tags: Featherstone,Genealogy
Posted by Lee Drew at 1:22 AM 2 comments: