Late February 1901 found Charles Logie ill with cancer on his face.  The cancer had been cut out earlier but had returned to plague him.  In this letter to his daughter, Beatrice, he noted that he had to get up during the night and was feeling poor.

His unmarried son, Walter, was home from the mining town of Mercur, Utah to see his folks.  The other Logie children hadn’t visited for a while. 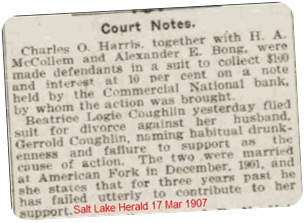 Apparently Beatrice Logie had sent a letter telling her parents that she was getting married.  The marriage to Gerald Coughlin would occur on the 23rd of Dec 1901 at the Logie home in American Fork, Utah.  Unfortunately, Beatrice hadn’t followed her fathers frequent remonstrance's to choose a mate carefully, because by the 17th of March 1907, Beatrice had filed for divorce.  In her divorce filing, she stated that her husband hadn’t supported her for the past three years and was a habitual drunk.

Beatrice was also making other poor choices in her life.  She planned to join a private club in Salt Lake City and would pay for it using the funds she normally used to pay tithes and offerings to the church.  Later entries and tidbits in Charles record substantiates this statement.

The School Marm boarder at the Logie home, Miss Frances Gailbraith, was still a good renter although Charles noted that she seemed to spend a lot of time in bed.

A legal ruling regarding forced immunizations had been released by this time and Charles noted that people were happy now that the “beautifull docters cant wave their butcher knives over our Sacred persons any more”.

Although his wit and jibes continue in this letter, the glitter in his eye was fading.  The illness and pain associated with cancer had taken the 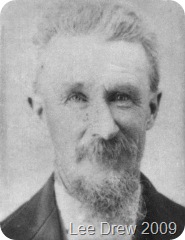 sight from his right eye and bent his nose.  Now, although he didn’t know it, cancer was slowly spreading deeper into the fibers of his body.

Well, here I am sitting in the kitchen trying to compose a letter to you in answer to your communication.  I don't feel verry O.K. to day.  Had to get up several times last night to watch the stars & see that there were no tramps, poarchres wandering about the estate.

We have had our dinner & the dishes are all cleared away & Walter is explaining to mother all about the way they drive mules in the mines & of corse She understands all about it & don't half try.  Old Lady Whitaker was telling Laura Boley that you were goint to be married & it fairley took her breath at least that is what the dame tells me to say in this report.  Laura says she has seen Mr. Hopkins & that he is a Small darm man.  Mother says is that realy So.

About the Telescope, the horonable Galbraith says that you need not bother about it untill you come home.  About that magnificent club.. Mother Says its wont be like paying titheing.  You will have to keep the dues payed up & there is always other incedentals & expences to all such affairs that are troublesome to keep paid up sometimes when members are not prepared.

We don't know anything about Sister Rebecker but tis against the council of our church for the members to join any of the Secret Societies.   So you mush use your own jidgement about joining the Oak Stick.

There is nothing much to write about.  She people down here feel mighty gay now that the beautifull docters cant wave their butcher knives over our Sacred persons any more weather we like its or not.  The noble battey must step a one side now when healthy people want to assemble.

Mother Sends a multitude of thanks for that piece of dirty paper that you sent her She says.  She don't know yet weather She will go to town on Conference but I think likely She will if She feels well.  I am happy to say she is doing fine this winter so far.

Well what more can I say.  The school marm is the same.  She injoys her bed.  Always seems tired goes to bed earley & rises late but we get along first rate.  We have not seen any of the mountaineers lately.  Sir Charles & family are geting pretty scarce lately.

Will now close hopeing this will find you quite well we send kind..

Love & remain as even your affect Father