Sold Out to Web Atwood ~ End of Diary

David Lewis Drew’s diary ends in December 1856.  Earnings from placer mining had all but ceased.  He was fortunate to find a buyer of his shares in the partnership. 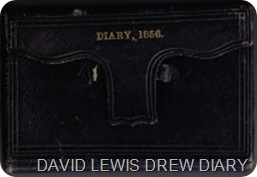 David little knew that his diary would bring some of the descendants of his business companions and family together one hundred and fifty years later when I first posted his words on my website.   We are scattered across the United States and are obviously all interested in genealogy.

The actual diary is in the possession of my cousin in California.  When I sent it back to her today, it was like saying goodbye to him in the form of something tangible.  We are fortunate that he kept a diary and that it survived to this point in time.

I’ve visited and walked in his homes in Plymouth, Massachusetts and Copperopolis, California several days apart in my quest to find more about my lineage.  On the flight home from Plymouth, I thought of how easy it was for me to travel cross country compared to David’s long journey down around the end of South America and then back up to Sacramento.

We love to find the names, dates and places associated with our ancestors, but finding their personal words and thoughts are a full magnitude of intrinsic value greater than them.

We enter David’s life with the final entries in his diary:

WEDNESDAY 3, -- Received A letter from Mother.

David’s mother, Anna Tribble Burgess Drew, died on 9 Feb 1852 before he left Plymouth for California.  He is referring to his stepmother, Caroline Tribble Drew in this entry. 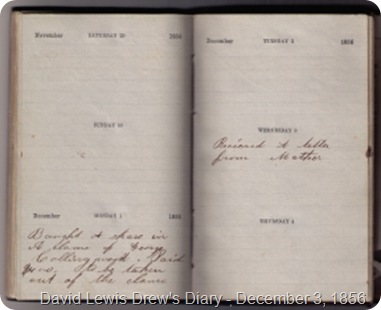 FRIDAY 5, -- Horse came down from the ranch.

TUESDAY 9, -- Commenced working on the Flat.

SUNDAY 23, -- Came down from the flat. have been on the flat all week.

Drew doesn't tell us what he was doing up on the Flat. He probably worked up a deal with Web Atwood for his share of the river claim, as well as looked around for a better claim to buy into.

FRIDAY 28, -- Sold out to Web Atwood for $600, three hundred down and the rest out of the claime. Came up on Shaws Flat this afternoon.

From notes in the back of the little book, it is estimated that David’s 1856 gross income was $1585.14, which included the cash proceeds from the sale of his share in the river claim and other sales of speculative interests. His expenses, which included, in addition to his share of the housekeeping expense, the mining costs and assessments and share expenses on the outside claims, totaled $1575.89, so his net after the above items was about $10 for the year. His outside mining speculations apparently were not very successful. Like most of the miners, he worked very hard, but didn't get very rich.

In 1869 David married Helen Marr Farrar. She had come to California from Macon, Missouri, 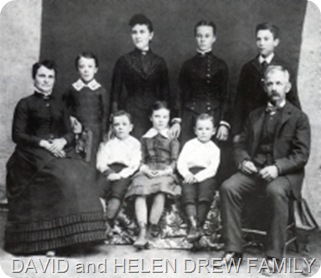 across the plains with her father and her sister. Her mother and little brother had died in Walworth, Wisconsin shortly before the trip. The Drew's lived for a few years at Bostwick Bar, near Reynolds Ferry, where David was placer mining. About 1880, they moved up to Copperopolis where they raised their family of eight children. David worked at times underground in the copper mines, and also drove a freight team from Stockton and Milton to Copperopolis. The Drew's also rented out rooms to miners working there.

David Drew continued in close touch with his father and his brothers and sisters for the rest of his life. He never returned to the east, even for a visit, in spite of repeated appeals for him to do so. Apparently money was scarce and he must have felt that his large family required his presence at his Copperopolis home. Fortune never seemed to smile upon the Drew's, and the eastern members were in no financial condition to make the long trip either. His father died at Plymouth, Massachusetts, in 1902, at the age of 93, and David survived him by less than a year. All of the Drew's eight children married, and there were twenty grandchildren.