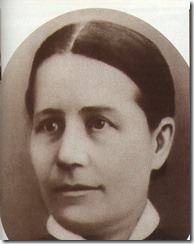 She Passed Away Sunday Afternoon -- A Short Sketch of Her Life

Mrs. Rosa Clara Logie died on Sunday afternoon, June 15, at 3:40 p.m. after a lingering illness of nearly six months. The cause of her death was a general breakdown from old age. The last six weeks she suffered considerable, but the end was very peaceful.

The funeral services were held Tuesday at 2 p.m. at the Second Ward chapel. W.S. Chipman taking charge. The choir sane, "I Need Thee Every Hour." Opening prayer was by Bishop W. B. Smith and the song, "Resting Now From Care and Sorrow."

Mrs. Logie was thoroughly good Christian woman and one who had a kind word for all and harsh words for none. She was a devoted wife and mother, a loyal friend and a good neighbor.

The following short sketch of her life was read by Brother Joseph B. Forbes:

Sister Rosa Clara Friedlander - Logie was born on the island of Guernsey in the English Channel, June 16, 1837 of English-French and German parentage. He father died while she was bat a child and her mother married again, living in London. At the age of 12 she embarked with her mother and stepfather for Australia.

Mrs. Logie in her youth was left alone in Sidney, New South Wales, in charge of Mission President Brother Farnham, her parents living in Melbourne. At this time, in company with Sister Mary Ann Evans who is now living here, they walked twelve miles every Sunday to the church branch of the L.D. S. in that far off country. sister Evans testifies to the faithfulness of that young maid to the principles of the Gospel. At the age of 16 this young maiden met and married Brother Charles J. Logie, about 1853.

They left Australia in 1854 for California, taking passage in the ship Julia Ann in company with the missionaries, John S. Eldridge, James Graham, Brother Farnham and twenty- three others with hopeful hearts they souls buoyed up with anticipation of arriving in Zion in a few short months. But God ordered it otherwise, and severe trials and disasters came upon them; their ship was wrecked upon a coral reef, which was part of the Scilly Islands, one of the Society group in the great Archipelago of the Pacific; a lonesome barren isle, where they were imprisoned for seven long months, living upon turtle meat and turtle eggs and water obtained from the rain, which they caught in shells. We cannot picture the dreary, disconsolate life they led. Five of the heroic band lost their lives by shipwreck; the balance apparently doomed to death by starvation and exposure. They were finally taken off the island by French fruiting vessels and conveyed to Tahiti, which is in the main course of vessels to the Sandwich Islands.

President S. S. Smith of Colorado, now dead, told me of the arrival of Brother Charles Logie and his wife at Honolulu and of their sad experiences on this voyage. In due time they arrived in San Francisco. Leaving San Francisco they arrived in Carson City, Nevada, living there a short time; from thence moving to Lehi, going from Lehi to Provo Valley, living a short time in Midway; thence to American Fork, where meeting their old friends, Brother and Sister Evans and Brother John S. Eldridge, they felt that they would settle down in peace and make their lifetime home in this city.

How much could be said of such lives, vicissitudes, trials, poverty, everything to endure to discourage and dishearten and through it all, her hope and courage predominated, and now they have both gone to their eternal rest and reward. such lives are but lessons, faithful lessons to those who remain giving strength to the weak vicissitudes encouragement to all.

Sister Logie was the mother of twelve children, and this alone it seems to me, entitles her to a crown of glory. There are nine living children as follows: