Mid-March, 1901 was still snowy and cool at the Logie home in American Fork, Utah.  Charles Logie and his son, Walter, had hauled manure into the garden to fertilize the peas, but on the morning of March 19th, snow had covered the ground again.

His wife, Rosa, rarely if ever wrote letter or notes of any kind, but rather relied on Charles to handle all of that activity for their family.

Issues with school teachers were again a source of discussion in the Logie home.  Their boarder, Frances Gailbraith, was a school teacher who seemed to struggle with her students much to the amusement of Charles.  In this letter to his daughter, Beatrice, you can “hear” his wry smile as he wrote that Miss Gailbraith observed that “she was beginning to find that she couldn’t believe everything her students said”.

Charles was famous for his sharp wit and humorous insight into life’s foibles and peccadillo's by those around him.  He cautioned Beatrice to keep his comments to herself as he was sure they would upset the tender Miss Gailbraith.

William Barnes Smith’s wife, Harriet Harrington Smith had died a few days earlier and was buried on the previous Saturday.

Charles, though ill with cancer, was preparing his garden for the coming growing season as we enter this letter. 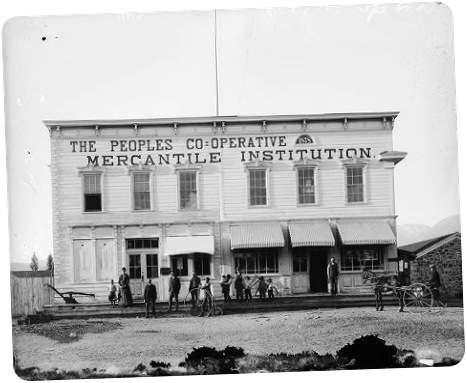 I thought I would Send you a few lines in answer to your letter which duly arrived to & found us the same as usual.  The weather Seems verry Changeable this month.  The ground was white with snow this morning when we woke up & it don't seem to be the right time to plant the garden yet a while.  We had a warm day last Saturday & me & Walter hauled several loads of Excrement (wheel barrow) on to the place where the peas ought to grow.

I am in the habit of asking the dame what she wants to Say but I find no change in her.  She allways says I don't know of anything.  There is no news So I have to hush up the items & do the writeing.

Well there seems to be gran dues among the Teachers lately.  They seem to be verry discontented all at once.  I believe the Trustees have been makeing them an offer to teach next term & some of the Dirgs Girls & passible some others would sooner have a change.

So poor Miss G. is in another peck of trouble.  She has heared that Johnson of Alpine the Whitby woman wants to come hear to teach & poor G_h is afraid that Johnson might be put over her & another thing.  She says if the present teachers leave it is verry likely their places will be filled with a lot like Graver.

Gal says that Cora is going on a mission but I verry much doubt it.  Then there is another calamity.  She told us at noon that there are sixteen of her Students absent today & she is beginng to find out that She cant believe any thing that they say.

It is fine amusement for me because a while ago She used to tell us that she had her children under such splendid controle so far superior to Will Robinsons gang up in the cock loft.

This is confidential you know for the good Lord knows where Id be if She knew I was telling you this kind of news.

Mother says she hopes you will be able to pay us a visit on conference time.  Long time we no see you.  I got a letter from Georgenia the other day they have both been kind of under the weather some but was getting better.  We heared from Eliza too & She talks of coming over on conference time.

I will now close. I am kind of poorley myself.  Mother seems first rate.  Hoping this will find you quite well.

This is confidential you know; loved this post, particularly with the juxtaposition of spreading "it" it in today's world.