Early April 1901 found Charles Logie struggling to work and bring cash into the family.   His cancer had become a constant problem and he noted it in his letter to daughter, Beatrice:  “I am kind of tired .. hard work don’t agree wid me now”.

Apparently, Rosa Logie had ordered and watched over the making of a dress for Beatrice.  It had been shipped to her with hopes that it fit and that she liked it. 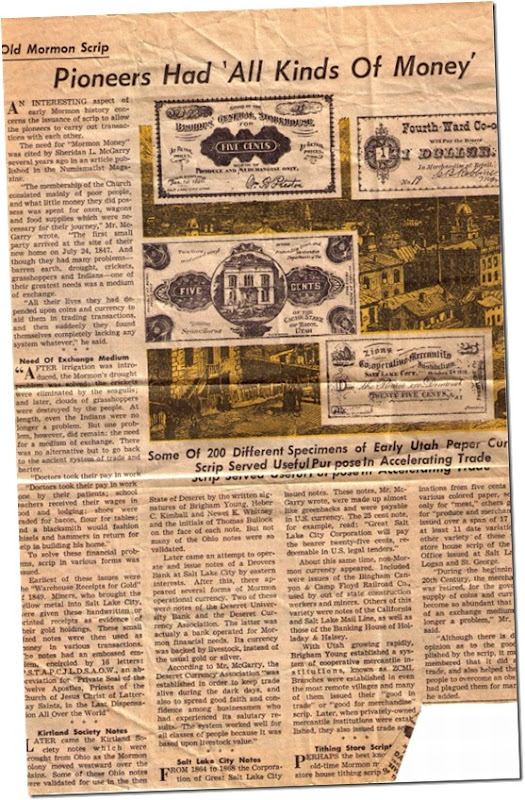 As usual, Charles injected another “Logieism” into his letter calling the money spent on the dress, “$htah”.  In the early days of Utah, Scrip was printed by various banks and other entities rather than there being one common currency.  Some of it was referred to as “Utah’s”, hence his mongolization of the term to $htah.

Charles had a fairly large investment in the Co-op store in American Fork, Utah and that contact probably initiated the work opportunity.  However, the time at work and resultant illness severely reduced his time and energy to put many words on paper.

Once again, we read one of the nicknames he assigned to family and friends.  In this case, he refers to his daughter, Elenor Logie Gaisford as “Joe”.

We enter Charles letter with his comment of shipping Celery to Beatrice….

Mother sent your dress to day by J. Greenwood hope you will get it all safe.  It took more $htah than Let thought it wold so she had to buy more stuf.   Mother incloses the bills so that you can see what the cash is .. all but the two & a half for makeing.  Let says if there is any alterations wanted she will fix it for you.  Mother says she hopes you will like the dress.  She allso sent you some Celley.  Please send word how you like the dress.

Walter started out for Mercur last Monday I went to work at the Co-op new building laying floor with Thos Thornton so I have not had any time at home this week or I should have and wined your letter before this time.  I don't know of any thing Strange.  I suppose Lawra B. writes to you.

I am kind of tired .. hard work don't agree wid me now.  Haw!  I have been sort of poorley the last few days but feel some better to night.  I did not go to Salt Lake last Sunday.  It was too stormey to suit me.

I got a letter from our Joe.  She Said She went to the depot expecting to go to meeting & there were to go & have dinner with her & Will

I will close hopeing you are well

I've been enjoying these letters and your commentary.