The eleventh of March 1901 found Charles Logie in a good mood.  His slicing humor was intact and functioning fully once again.  Although it was still cold in American Fork, Utah, the Logie’s were snug and warm with coal stoves scattered throughout their home.

A new church organist was brought up from Provo for some reason.  Charles reported that Brother Grant gave the closing prayer (spasem) in the meeting.  Charles again called a local church leader by the nickname he always used when mentioning him. 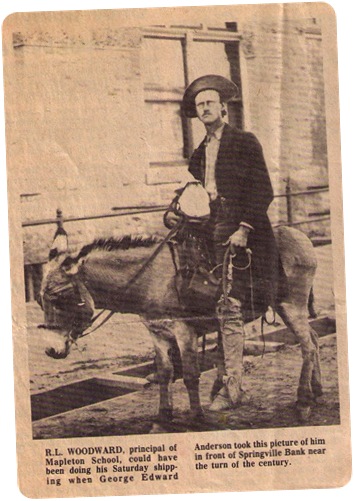 A man by the name of Garf was in town courting all of the single older women.  According to Charles, he was and old devil of sixty.  At age seventy-one, I guess that Charles knew that it was an apt description.

Miss Gailbraith, their lodger, had lost her cat and was lonely.

Beatrice’s boyfriend had left her and she was going out by herself in Salt Lake City at night.  Charles and Rosa were concerned that she was going out dancing too often in the evenings.  He gave her advice that she “should not go out at nigh without a Suitable Escort”.

Apparently there was a trial for slander going on in American Fork.  Charles and his son, Walter, had gone to the proceedings on the previous Saturday.  As usual in small towns, the trial and outcome would be reported in detail in the newspapers of the day.

As it is some hours since we heard from you I thought it would be adviseable to drop you a few lines to let you know that we are still living in the Same place.  This is a verry dull day.  The clouds are hanging over our devoted city in a threatening manner all day ~ looks as if there might be any amount of snow decend upon us at anytime.  We have not removed any of our Stoves yet ~ have one in each room & pleanty of coal to feed them so they cant freeze us out.

Anyway well we had a new organist yesterday.  The new Expert from Provo.  He played the first three tunes & then was invited on the Stand to Show himself to the congregation.  Bro Grant rendered the Closeing Spasem.  The Catfish did not wave.  The music club ~ the new lights from Alpine by the name of Vance performed the Gracefull a cha so you can see it is all Grand Change.

Old Garf is hanging round Miss Coray in fine style.  Visits her in the School room & went with her to Provo last Saturday.  It was teacher day over there.  The old devil must be Sixty years old.  He was Chasing after Mable Christiansen a while ago.

Mother says she don't think that Miss Gal wants to go to any other parts of the Earth.  She seems to be settled down for the present any way.  She did not even go to Church yesterday too tired.  She lights her fire & sits in the shade & don't want to go out at all.  The poor soul has not any cat now, so she talks to the canarie some times.

You stated in your last epistle that you had no Fellow now.  Mother says what is the matter with Mr James the member in Salt Lake.  Do you ever hear from him.  We think you would be too tired to keep school in the morning if you go dancing verry often in the evening but at the same time we are pleased to hear that you are enjoying yourself but there is one little item that I wish to mention & this is do not go out at night without a Suitable Escort.

Me & Walter were at a trial last Saturday between Dav Rogers & Miss Marr for Slander.  Judge McNeil takes a week to render a verdic prehaps you will see the account in the paper.