Charles Logie wrote regular letters to his daughter who was a school teacher in Bingham Canyon, Utah.

His unique nicknames for everyone and every event in his life display his mischievous sense of humor and make his letters even more precious to his descendants. I've retained his spellings a purposeful hacking of the English language in this transcription.

In this installment, Charles talked about the low voter turnout for school board elections, the plans to build a tabernacle in American Fork, Utah and the comings and goings of his married children and grandchildren.

It was hot in July 1900 in American Fork as the thermometer on his porch reported a temperature of 105 F in the shade.

The only photo I've ever found of Beatrice was in an old newspaper article standing by her students and have included it here. 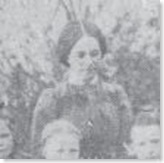 Your letter came to hand yesterday, found us well. Mother got home all safe on the night of the fourth. I had a splendid time. Staid at home all alone and minded the Estate. Didn’t go over to Peats once all day. All the Bennett’s went to the Lake to spend the day & see the cranks play baseball. There is not much going on here just now. This is Election day & some are voteing for a School Trustee, John E. Buckwalter is the one selected in place of J. L. Snow. It is a verry quiet affair. I went over this morning about 10 & there was no one but the three trustees & there had only been 8 votes cast. Our beloved Brown is on the ticket for county Superendendent & there is no oppertion in our city. We had a pecular meeting last night. It seems that some of our church officials want a fine new place to hold Sunday School in & they want the people to agree to build a fine large Tabernacle & have it filed up while to accommodate the Sunday School. There was a committee appointed to make inquires about what such building would cost & how long it would take to build it. Carne Robinson & Geo. Currin have had quite a hot time about where the means was to come from & weather the people would be willing to build such a place for the benefit of the Sunday School. There was some pretty hot talk on both sides of the question. Sir Charles & Lady called last Saturday & took mother & Walter to the Lake in their fine chariot. I was busy getting ready for watering & could not go. They stayed to refreshments after they returned. Laura & Bertha are anxious to hear from you. Lee Clarke has a bran new sister came from Nebraska last Tuesday. We have not heared from Nelece yet or Libey (Grandma Elizabeth Bennett Drew). Mother says she had not seen any of the mountaineers (Alpine) yet & when any of them appear she will ask them when they will be ready to procede with that Barn. It is warm in the land thermomerter up to 105 under the poarch. I must stop for want of paper. Kind Love to Hall.

Upside down note on front page:

Have you heard from the Cat Charmer I have not got any answer to my letter which I wrote some two weeks since.