Charles Logie wrote to his daughter Beatrice about the use of a telephone and travel aboard the Utah Inter-Urban Railroad.

Charles frequently referrers to “The School Marm” in his letters. He is usually talking about their boarder, Miss Frances Gailbraith, who was a school teacher in American Fork. Frances was born and raised in Connoquenessing, Pennsylvania. Her exploits with trouble making students and hopeful encounters with suitors never ceased to amuse Charles as will be witnessed in future letters.

Telephones were new to the area when this letter was written and they undoubtedly had to go to the Cooperative Store in downtown American Fork to talk to Beatrice who was in Salt Lake City.

Transportation in that day was via the old Utah Inter-Urban Railroad, an electric powered train system that was replaced by highways and automobiles in later years. Now, everyone wishes the system was back in place and in service. It is being replaced by the very expensive FrontRunner system from Salt Lake City to Provo.

Charles and Rosa Logie had a new grandson, Walter, according to this letter. He was the son of their daughter, Elenor Logie Gaisford. 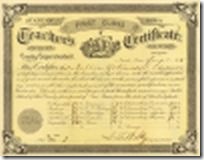 We received your letter this morning & was pleased to hear that you were well in regard to the Telefone. We think you did right in waiting to see if you can get that school. Miss Boley expects to arrive in the city on Sunday evening by the D & R. G. & wished you to be at the depot to receive her. Bro. Forbes saw those certificates that you have & he thinks there is no nead to apply to Brown as you already have his certificate that he gave you at Alpine. Bro Forbes says he will send you a recommend. Don’t know of any thing special. I am working every day & I have a hard time of it nights. The Dame & the School Marm are always lawing me. Well that’s all. We are well & hope you are about likewise with.

Got a letter from Nellie yesterday. They are all well. Got the baby blessed last fast day & they call him Walter Logie Gaisford