Rosa Clara Friedlander Logie was born on the Isle of Guernsey, in the English Channel on 16 June 1837 of English, French and German descent. Her father, Henry Friedlander, died when she was a small child. Her mother, Eliza Sampson Friedlander, remarried a Mr. Watson in London, England. When Rosa was 12 years old, they went to Australia.

Her mother and stepfather were called on a church misisons, so Rosa was left with the family of the church mission president, Silas Farnham, in Sydney, New South Wales, Australia and the parents went on to Melbourne, Australia to live.

She joined the L.D.S. church and Rosa and a young married woman of the same faith, Mary Ann Evans, would walk 12 miles every Sunday to attend the meetings. Sister Evans was the chorister and Rosa was a member of the choir. Sister Evans testified to the faithfulness of that young maid to the principles of the gospel.

One day, when she was about 15 years old, she was standing on the porch of the 2nd story of a hotel in Sydney. A group of young sailors came down the street. One looked up an said, "Look fellows, there stands my wife. I'm going to marry that girl." Another one said, "Not if I get there first." They made a dash for the hotel door, but sailor number one climbed the porch post and landed first beside the girl. Thus Charles Joseph Gordon Logie claimed sweet Rosa Clara Friedlander for his bride at Sydney, Australia on 24 may 1853. He was 24 and she was 16 years of age.

The following year they were blessed with a darling baby girl, on the 27th of June 1854. They named her Annie Augusta.

Charles, having joined the Church of Jesus Christ of Latter Day Saints a month before marrying Rosa, had the desire to gather with the Saints in Zion. When baby Ann was one year old, they left Australia on 7 Sept. 1855 for California, taking passage on the ship the "Julia Ann." Disaster came upon them. During a terrific storm, the "Julia Ann" was blown off course and plunged head on (in the middle of the night) into a coral reef. Capt. B. V. Pond soon realized the ship was going to pieces. Fifty-six people were aboard. Something had to be done and quick, so Capt. Pond, a perfect gentleman, let himself down over the side of the ship into the dark water to try to swim for shore. He soon landed on the coral reef. Swimming back, he fastened a strong thick rope to the ship and tied the other end around his waist and then returned to the reef where he secured the rope firmly. He then swam back to the ship. He made a sling or sort of a basket of rope to sit in, slipping it over the tightened rope. He then asked the women to come to him one at a time. One glance at the dark terrifying water and they were too frightened to go over the side of the ship. Finally, Rosa said she would go first and climbed down the rope latter and sat on Capt. Ponds lap. Hand over hand, he pulled them to the reef. He left Rosa standing chest deep in the water and returned bringing seven women back that way. Two women and three small children were lost being swept over board by the waves, but the rest spent the remainder of the night sitting or standing waist deep in water until the next morning, not daring to go on the island until they could see what was there.

When morning came, they went upon the island. It was barren, no trees or fresh water. Everyone was so exhausted, they sank down on the sandy beach and wept and prayed.

Large turtles came out of the ocean and crawled over them. They were too tired to get out of the way and every little while you could hear a thud or splash as someone flung off a troublesome turtle. There were also a few crabs around.

As soon as possible, the captain and men went back to the much-battered ship. All they could save before it broke completely up was one barrel of sea biscuits, one chest of carpenter tools, one chest of tea and one trunk of women’s clothes. A few boards drifted ashore from which they built a small raft.

They dug holes near the ocean and the salty water filtered through the sand and made it more palatable. Some of the men rowed 3 miles on the raft to another island where they obtained some coconuts. They were allowed just so many a day. They saved the shells and set them out to catch rain water to drink. (Laura Logie Timpson and a granddaughter in American Fork still have one of the shells.) Large turtles would crawl upon the shore to lay eggs. The men would catch them and turn them on their backs and kill them. Turtle meat and eggs and a few coconuts were their only food. We cannot picture the dreary, terrifying life they had to live for months on this barren island, apparently doomed to death by starvation and exposure.

Rosa became very ill. Her husband obtained a large silk skirt from the trunk that had been saved and made sort of a tent to shield her and baby Ann from the sun and rain. One day, Elder John Eldridge asked, "Where is Rosa, Charles?" He told him she was very sick. John made a cup of tea and took it to her tent. His feet were bleeding from walking on the sharp coral of the reef. Rosa never forgot this little act of kindness. Except for boils, probably caused from their diet, their health was fairly good.

Baby Ann had an enjoyable time crawling around in the sand. They were finally taken off the Island on 3 Dec. 1855 by a fruiting vessel the "Emma Packer." They were conveyed to Tahiti, which was in the main course of vessels to the Sandwich Islands. Latham Master was Captain of the vessel. They arrived in the spring of 1856 in San Francisco. News of the shipwreck had preceded them and they were met at the dock by a goodly number of people. A young newspaper editor inquired for the young woman who first went to the reef. Rosa stepped forward and was presented with a pewter teapot in token of her bravery. The young editor was George Q. Cannon. He with Elder Joseph Bull edited and published the Western Standard paper in interest of the L.D.S. Church in San Francisco.

The Logie Family was directed to the ranch of John C. Nails, a Mormon, in Carson City, Nevada where they stayed until Brigham Young called the Mormons to Salt Lake City. Their second child, Charles Joseph Logie was born in Carson City on 18 Nov. 1856.

Upon their arrival in Salt Lake, the Logie, Nails and Gerr families were sent to Lehi, Utah County. The next year, 1858, the Logie family moved to American Fork. After a few months, they made their home in Wallsburg. On 14 March 1859, their third child, Silas, was born in Wallsburg. He was named after President Silas S. Smith of Colorado, who met the Logie’s in Honolulu, after they were rescued for their shipwreck. He became a very good friend to the family. 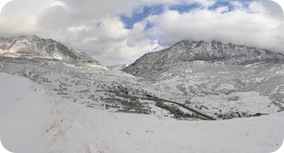 Charles returned to Provo to work during the winter of 1860, leaving Rosa alone with 3 small children in Wallsburg. Indians often came in to get warm and would burn up all their wood. She was just tired of living up there alone, and one day she bundled up the children and started down Provo Canyon through deep snow. She met her husband coming up. They returned to their home, but planned to move to American Fork, which they did the following spring, living there the remainder of their lives.

When one of the younger babies came, Rosa lay in bed with pans all over the bed to catch the rain water that leaked through the dirt roof. This gave her rheumatism. She suffered months of pain and had to learn to walk all over again.

Their home was always open to the wayfarer and many partook of their hospitality. Rosa was a wonderful cook and home maker and she could always make room for one more.

Though they had many hardships to endure, to discourage and dishearten them, faith hope and courage predominated. Such lives are fruitful lessons to those who remain, giving strength to the weak and encouragement to all.

Silas was a midget and rode a trained pony in a circus. He had beautiful golden hair and blue eyes and was about 3 ft. tall. He received much attention and one of the van drivers became very envious. During one of their moves from town to town, Silas was riding his pony along side the van. When they came to a narrow place in the road, the driver crowded the pony off and it fell on Silas, killing him.

A few months after their 50th wedding anniversary, Charles died of cancer on 12 July 1903. Rosa continued to live in the "Logie Place" with her daughter Georgina, where they served tasty home cooked meals to the travelers.

Rosa was very economical in money matters, but loved to spend for improvements around the place, especially if she could do it on the sly, to get the best of Georgina.

She was active up until about a week before her death. She passed away on 15 June 1913 and was buried in the American Fork Cemetery.

Technorati Tags: Logie,Ancestor,Genealogy
Posted by Lee Drew at 1:55 AM