The History of Thomas Ashton 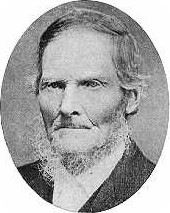 Thomas Ashton, the son of Joseph and Catherine Callis (Cowley) Ashton, was born in the township of Parr, Lancashire, England, 7 Nov 1813. His father Joseph Ashton was a silversmith by trade. Thomas had one sister, Eleanor, who was nine years his senior.

At the age of fifteen years, he was apprenticed for six years to the trade of wheelwright, carriage builder and a ship carpenter. At the expiration of this apprenticeship, he went to work on the London railway which was being built at that time.

On 20 Nov 1836 he married Mary Howard, daughter of James and Mary Howard of Leyland, Lancashire, England at Prescot, Lancashire, (Merseyside) England. He and his wife were the first citizens of St. Ellen's to be baptized members of the Mormon Church. They were baptized by Samuel Cryer at St. Ellen's, Lancashire, England 28 Jan 1841. They emigrated to America in 1841 and made their home at Skunk River, Iowa. The family was driven away by the mob and went to Nauvoo. He returned to Skunk River to sell his property, but the mob had possession and compelled him to sign a deed to the property.

His wife died 26 Aug 1849 at Pottawattamie, Iowa. She was the mother of five children, Joseph, Catherine, Margaret, Mary Ann and Elizabeth Eleanor who died a few weeks after her mother.

The same year Thomas Ashton built a log house about five miles north of Kanesville, Council Bluffs, his family consisted of his wife and two children, Joseph and Mary. He left them in the care of John Mills while he went down the river in search of work. Mary, his wife took sickly with ague. She was sick about three weeks gave birth to a baby girl (named Elizabeth Eleanor) 13 Aug 1849 and died 26 Aug 1849. She was buried at Kanesville, Iowa. Her father, Brother Mills wrote to her husband of her illness, but he did not get home until after she was buried. She was a good woman and loved by all who knew her. The baby died 5 Oct 1849 and was buried inside the coffin of its mother. 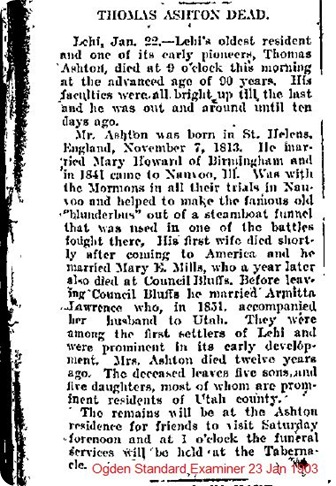 Thomas Ashton stayed home and took care of his four children that were left without a mother, with the aid of Sister Mills and her daughter Sarah. He married Sarah Mills 25 Sept 1849. She died 3 Sep 1850 leaving one child John Mills Ashton. On 17 Feb 1851 he married Arminta Adelia Lawrence at Council Bluffs, Pottawattomie, Iowa. Before his final move to Nauvoo, he went there to work and worked under the direction of the Prophet Joseph Smith. He assisted to build the noted Mormon Boat, the "Maid of Iowa." The family moved to Nauvoo after the death of the Prophet. Brother Ashton took part in all the events of the trying times until the final expulsion.

He worked in the big wagon shop where the wagons were made for the trip westward. He assisted in the last defense of Nauvoo against the mob and helped to work the noted cannon that was made out of a steam boat shaft. A sythe of his that he used to protect the prophet now hangs in the museum in Lehi, Utah.

The family left Nauvoo at the final expulsion and trouble and went to Winter Quarters, passing through all the events that happened there until the breaking up of Winter Quarters. Not having means enough to continue on to Utah, they moved back across the Missouri River to Council Bluff, Pottawattomie, Iowa. Here they lived and raised crops until the year 1851. Then the family moved to Utah, traveling in the company of Morris Phelps. The company arrived in Salt Lake City 27 Sept 1851. They came to Lehi arriving 6 Oct. 1851 and have lived here since that date.

Brother Ashton took a very active part in the planning and making of our first water ditch and was one of our first water masters when no salary was attached to that office. He was also very active in planning and building our first bridge across the Jordan River and other places, also our first meeting house. He was six times elected a member of the Lehi City Council and was also prominent in adding his means in the outfits of all of the boys growing on Indian raids. He lived to a grand old age of eighty-nine years, two months and fifteen days.