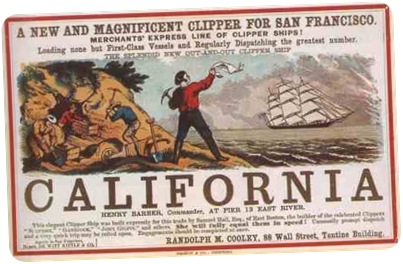 David Lewis Drew’s diary entries in July 1856 were brief. Apparently, he and his partners were not having much success in their quest for gold because he didn’t include a single comment about their earnings during the month.

His enthusiasm to enter more descriptive diary entries was obviously on the wane. After several years in the intense quest to find his fortune in the California gold fields, the dream was dying.

Campaigning for the Presidential Election of 1856 had arrived in Calaveras County. On Saturday, 26 July he went to Columbia to hear the campaign presentations for all three of the presidential candidate. In later diary entries, he revealed the candidate and political party that most closely matched his own ideals and beliefs.

We enter July 1856 with David’s two partners putting an addition on to their ‘house’. A stick-built room on their combination tent / shanty must have been welcome.

TUESDAY 1, -- Len and George put on an additon to our house.

WEDNESDAY 2, -- Haulled down six hundred feet of lumber and packed home the Walker Co boxes Finished the house this afternoon.

This entry is one of the most compelling statements placing the location of the river claim at Walker's Bar.

THURSDAY 3, -- Went up to Columbia this morning after nails Comenced puting in our too inch boxes to day.

FRIDAY 4, -- Went to sonora to the celebration. but it rained a part of the fore noon and spoilt our fun. Went to a ball in the eavening at Capt Bartletts.

SATURDAY 5, -- Took a ride up in to the mountings this forenoon to see the country. We had a splendid view of the plains and the mountains back.

Jamestown was called Jimtown by the miners.

MONDAY 7, -- Went to work this morning a makeing boxes.

TUESDAY 8, -- Went up to Columbia this morning after nails. Mosher was down here today.

WEDNESDAY 9, -- Went to caulking boxes this forenoon. in the afternoon commenced setting sluice.

THURSDAY 10, -- Haulled some lumber down this morning.

MONDAY 14, -- Finished setting boxes to day. I made up three awnings today.

TUESDAY 15, -- Got to washing this afternoon.

WEDNESDAY 16, -- Got a letter from Harry to day. and answered it.

THURSDAY 17, -- Went up to Columbia to day and got a letter from William Keene.

FRIDAY 18, -- Pretty warm to day got a lot of papers from Harry today.

“Harry” was his brother, Harrison Warren Drew of Plymouth, Massachusetts

SATURDAY 19, -- Paned out today got rather a small weeks work.

MONDAY 21, -- George was not very well today and did not work.

TUESDAY 22, -- Business looks brisk down here now the claims are about all opened.

THURSDAY 24, -- Mr. Card was down here to day and stopped and took diner with us.

SATURDAY 26, -- I am going up to Columbia this evening to attend the ratification meeting.

There were three presidential candidates involved in the election of `56. The strong Democratic party had nominated James Buchanan for president. The American (Know Nothing) and Whig parties had united behind ex-president Millard Fillmore, and the ratification meeting on July 26th was called by "Friends of Fillmore." The newly organized Republican party had nominated the "Pathfinder", John C. Fremont, as their first presidential candidate. The somewhat biased publisher of the Sonora Union Democrat expressed his opinions of the situation thus: "MORE FOLLY --All around we hear of ratification meeting of the Republicans and rejoicings, fireworks, etc., in honor of Fremont. In the course of next month it looks as though $100,000 would be spent in gun powder and flummery. All this is mere folly and nonsense. If the Republicans and Americans can be awakened to a sense of their forlorn condition and ridiculous chances, let them unite for a grand movement; otherwise the game is lost, and the less powder they burn, and the less noise they make, the better it will be."