Franklin Wheeler Young, a Patriarch in Emery Utah Stake, was a son of Lorenzo Dow Young and Persis Goodall, and was born in Scott county, Ill., February 17, 1839.

His parents were driven from their farm and home into Far West, Caldwell county, Mo., in the fall of 1838, and were compelled to leave all their earthly goods and effects, except a light wagon and horse team, and some bedding hastily thrown into the wagon. They left every other thing they possessed to their persecutors, to take and use.

As a boy Franklin was not able to attend school, or get a start even for an education. Early in 1846 his people joined the camps of Israel in their exodus from the city and temple they had assisted in building, and the little boy lent a hand in the preparations for the journey in parching corn by the bushel to be carried along as food ready cooked. His early recollections carry him back to the day the Mormon Battalion marched out of camp, and started away on their famous march to Mexico.

In the spring of 1847 his father, was selected to go with the first company of pioneers, and later in the season he went along with a part of his father's family, including his older brother John R. across the plains, in Capt. Jedediah M. Grant's company, and arrived in Salt Lake Valley, October 4, 1847.

His father had a few sheep and a few cows, and these were put in with other cows and sheep and made up two company herds, and these the two boys, John R. and Franklin W., were required to assist in driving. Franklin W. took his turn as a matter of course and walked the greater part of the way from the Missouri river to Salt Lake Valley in his ninth year. He was baptized by his father, Elder Lorenzo D. Young, during the winter of 1847B8, in City creek.

He was a living, grateful witness of the Divine power manifested in the destruction of the myriads of crickets that infested the first crops in Salt Lake Valley, by the sea gulls, which came in vast numbers, and alighting in the fields, devoured the crickets until gorged, when they would fly away to the two or three little water ditches that had been made by the settlers, where they would drink water, disgorge themselves and then return to the slaughter. Thus did they work from early morning until the shades of night, from day to lay, until the crickets were destroyed, the growing crops preserved and the little colony of exiles saved from starvation. From the spring of 1850 to the spring of 1855 the greater part of Franklin's time was taken up in herding his father's cows and sheep, and he had but very little chance to attend school.

At the April conference of the Church in Salt Lake City in 1856, he was called on a mission to the Sandwich Islands. Leaving Salt Lake City on the 7th of May, following, he drove an ox‑team, in one of the companies going to settle in Carson county, now Nevada, as far as Washoe valley. Thence he walked, with several of his fellow missionaries, across the mountains into California. In the harvest field he labored to earn money to pay his fare to Honolulu, where he arrived in company with Elders Alma L. Smith, Fred A. Mitchell, Thos. Clayton, Wm. France, Wm. H. Wright, Robert Rose, John Brown, and others, in the early part of September, and soon after was assigned to the Kohala district, on Hawaii, to labor under the presidency of Elder Joseph F. Smith. He soon acquired a knowledge of the language and was an active, energetic missionary, baptizing a goodly number of natives into the Church.

When all the Elders every where were called home, because of the Johnston army troubles, he was released from his labors on the Islands and arrived in San Francisco January 20, 1858, having worked his passage, as assistant cook on the sailing vessel that brought him back to his native land. From San Francisco he came with a company of returning Elders and a few California Saints. The returning Elders referred to were Wm. W. Cluff, Sextue E. Johnson, Wm. King, John R. Young, Franklin W., the subject of this sketch, Smith B. Thurston, John A. West, George Speirs, and others, all of whom walked from San Francisco to Utah, by way of the Southern route, excepting John R. Young, who got an opportunity to ride with a party from California.

Captain Harbine, the leader of the party and others, came to sell President Brigham Young a few million acres of land they claimed a right to in South America. Elder J. R. Young came on through with them as a guide, but President Young did not care to purchase from them, nor move the Church to South America.

Brother Young rode from the Mountain Meadows with Wm. S. Godbe, who was returning to the Valley from San Bernardino, in post haste, with a trunk containing valuable documents for Col. Thos L. Kane. He, Elder Godbe and Wm. C. Lewis, of Parowan, had made the trip from Pinto creek to San Bernardino, 375 miles, and back to Pinto with four mules, without change of teams, in ten days, an average of 75 miles per day, and with the timely aid rendered by the Bishops of Pinto, Parowan, Beaver, Fillmore, Holden, and Nephi, in furnishing relays of teams, made the run from Pinto with Franklin W. to Payson, 230 miles, in 50 hours.

At Payson Brother Young stopped off and returned to Spring Lake, where his father and his brother Wm. G. Young were encamped. The latter was Bishop of Grantsville, and he was camping at Spring Lake with the greater part of the people of his Ward, during what was called "the move," they having left their all as a witness to God and all right thinking people that they were willing to do so, rather than give up "Mormonism."

Brother Franklin W. took one of his father's teams and went at least twice to Salt Lake City, hauling flour, meat, and grain to Provo; thus he helped in "the move," until the word came that a compromise had been agreed upon, and that all were at liberty to return to their homes. Franklin W. then joined with his brother William G. and returned to Grantsville.

At Grantsville, Franklin W. was married to Nancy Greene, and in September, 1859, he got a call from President Brigham Young to come to Salt Lake City, prepared to go on a mission. Dropping everything, he hastened to to the city, where he on September 14, 1859, was ordained a Bishop and set apart to preside over Payson. He was twenty years, six months and twenty‑seven days old when he was ordained to this office, and at the time was the youngest Bishop ever ordained in the Church.

On 6 July 1861 Franklin married Anna Maria Sabin in Salt Lake City, Utah.  The Ward of Payson at that time had about 175 families, besides a branch at Pondtown, now Salem, of about 25 families. For two years the "Boy Bishop," as he was often called, struggled with all his might to do his duty, and succeeded in bringing about a better feeling of unity and good will in the midst of the Saints of his Ward, but when President Brigham Young saw that it was telling on the young man, and that he was trying to carry too great a load, he called him on a mission to the cotton country or "Dixie," to help to build up the barren wastes there.

Accordingly on November 3, 1861, Brother Franklin W. in company with his brothers John R. and Lorenzo S. and Henry M. Russell pulled out for "Dixie" on December 13, 1861, Brother Young was chosen to act as Bishop of the Grafton Ward, including Rockville. This was done at a meeting held in the camp, then called Grafton, and presided over by Apostle Erastus Snow.

This position he held until October, 1862, when he removed with his family to St. George. Here he was chosen as a member of the High Council. In October, 1863, Brother Franklin was released by President Brigham Young, from the "Dixie mission," and called back to Salt Lake City, and directed by the President to remove the next spring to Bear Lake Valley, and help to settle that country, which he did, arriving in the valley May 8, 1864.

He settled on Big Creek, afterwards called St. Charles. Here he laid out the first water ditch for the irrigation of the land south of Big Creek. August 8, 1864, he was appointed by the Probate Judge of Richland county to be the county clerk thereof, and was elected a little later county recorder for Richland county.

The winter of 1865-6 was a very hard one in Bear Lake valley. The snow was deep and for weeks there was no track broken from one town to another. Brother Young, acting then as a home missionary went to every town in the valley on snow shoes. In his trip through the north end of the valley, Elder James H. Hart accompanied him, and on their way from Montpelier to Paris by way of "The Hay Stacks," they were overtaken by night, at a time when a dense fog had rested over the valley for two or three weeks, so that the sun, moon or stars were not seen, and snow covered the ground everywhere, with no dark objects outside the towns. 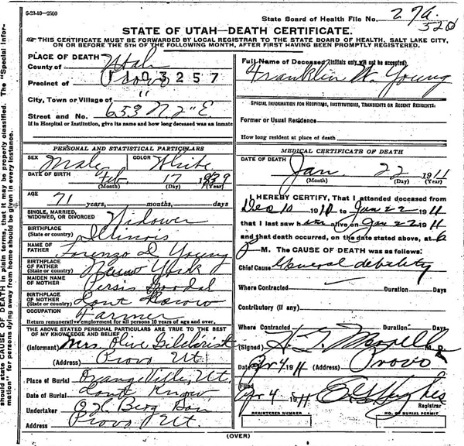 In the darkness of the night they had turned from their course, which should have been about southwest; when all at once Brother Young saw a star shining, directly ahead of them, and called Elder Hart's attention to it, observing at the same time, "That is the north star." Brother Hart said, "No, that is impossible, for we are going nearly south." They stopped for a moment to discuss it, when to their great surprise the fog cleared away and allowed them to see the "Dipper," just for a minute, when the fog closed, and shut the stars from their view. But they were convinced they had been turned around, and they now turned about, following their back tracks to where they had turned. Soon afterwards they heard a dog bark, and going straight ahead toward the sound, they came to the town of Paris, very nearly exhausted. Had it not been for the opening or lifting of the fog they would have perished that night, and Elder Young has ever looked upon it as a direct miracle, or as a direct manifestation of Divine providence to save two humble Elders from death.

From Bear Lake to Cache valley, in 1866, and from Cache valley to Salt Lake City, in 1873, and out to the frontier again, in 1875, our pioneer brother settled on the Sevier just in time to give Leamington its name, and from there he went to Rabbit valley in October, 1877, as a pioneer again, and gave names to Thurber and Loa, now in Wayne county, Utah.

From the LDS Biographical Encyclopedia