David Lewis Drew kept a diary for the year 1856 detailing his life as a placer miner in what is now Calaveras County California.

His original spellings have been left intact.  The diary was approximately six inches by four inches and although he wrote his entries sitting on a cot in his tent, his script is legible to the reader.

We find David discussing the problems and maladies affecting his life at the beginning of February 1856.

FRIDAY 1 -- Put on our hose and got the watter on and found our hose too small took them off and worked the old way. commenced the bible to night.

SATURDAY 2 -- got letters and papers to night. one letter from Mother and one from Sally Ann. answered mothers

Sally Ann was David's sister, five years younger than he, and was only 12 years old when David left home. He had now been away from home for nearly four years, but he kept in close contact by letter writing with most of his brothers and sisters, as well as with his father and step-mother. In addition to writing to David, they sent newspapers and small luxuries that he ordered that we unobtainable locally except at great expense.

SUNDAY 3 -- Went on the flat. found that they had not been to work on the new claim this week think that it will not pay 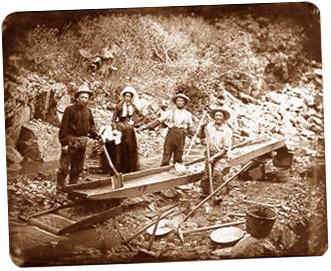 TUESDAY 5 -- Worked all day to day and an ounce. have not had any brake downs for four or five days

WEDNESDAY 6 -- Did not work this afternoon was not very well

FRIDAY 8 -- Not any better to day Find it dull work laying around in the house.

SATURDAY 9 -- Felt better this morning so I went to work. had a little rain this morning. thought that we'd have rainy day. but it cleared up before noon. Took out this week $130.50

MONDAY 11 -- Had to go up and turn the watter on this morning Have rather bad news from the K.N. tunnel afraid that we have made rather a bad speculation there

TUESDAY 12 -- Fine weather The boys on the flat will (have) a good time to loafe in. there not being any watter to wash with.

Just as today up here we follow the weather very closely, particularly in the rainy season, so they did during the gold rush. In fact, it was of even greater concern to them because water was the mens of recovering the gold from the placer deposits. Up in the "dry diggins" work could be done only when the ditches brought water to the miners. Down on the river, the water lasted longer, but in dry years the season was considerably shortened.

WEDNESDAY 13 -- Things went on as usual to day. sun lays down on the bak pretty warm

FRIDAY 15 -- Turned on the watter and went to work about night the watter began to slack off. Wrote to sally ann this evening

SATURDAY 16 -- Had to go up this morning and shift our spouts which took us until ten oclock got a pretty good days work to day four ounces and two dollars. took out $162.38 this week. received a letter from Harry

Harry was David's brother. Harrison Warren Drew, two years his junior. In this day's entry, Drew refers to the day's cleanup as being "four ounces and two dollars". They received approximately $16 per ounce, and figured the fractional part of an ounce in dollars. We think that spouts )spots, sputs) were the connections from the ditch or flume to the sluice boxes, or from one string of boxes to another.

SUNDAY 17 -- Went up on the flat to day. found it rather dry times. Mr. James Cooper arrived there to day from Plymouth

WEDNESDAY 20 -- Rained nearly all day to day. went up after diner and took our upper boxes out

THURSDAY 21 -- Clear weather this morning put our boxes in and went to work. quite showery this afternoon with a little thunder

SATURDAY 23 -- Went to Jim town to day to attend a meeting of the K. N. Tunnel Co. paid an assessment of $25.00 White shot a cat this morning

Most probably a bob cat

SUNDAY 24 -- Stoped in Columbia last night blowed quite a gale all night. Find it rather dull work loafing around Columbia. taken out this week $275.00 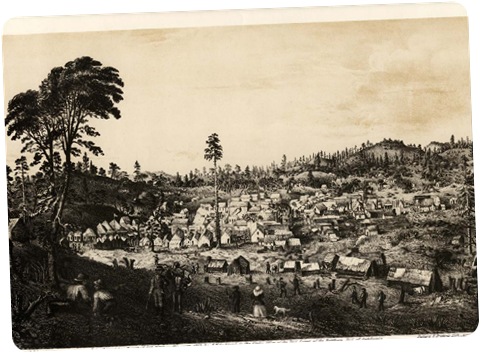 MONDAY 25-- Cleared out our dich and got the watter on and went to ground sluceing White shot a fox last night. I skined him to make a tamborine of Len is sich today

WEDNESDAY 27 -- White went up this morning to get his boots fixed. Mr. Sisson was down here this forenoon. Milk man came to day. wants a dolar and a quarter a galon for his milk

THURSDAY 28 -- Len went to work this morning. got off a big piece of dirt to day

FRIDAY 29 -- Wrote to Harry and Ausitn this evening