April 1856 started out with an adventure for David Lewis Drew and his gold mining partners in Calaveras County, California. The river was high from the continuing snow melting in the high country and then something unexpected was found.

David’s partner, Charley was digging soil to run through their sluices when he uncovered the body of a man. Returning to camp, he told David that he ‘supposed that he had met with foul play’. Life in a gold rush setting actually seems to have produced a scene from a Hollywood movie for the partners.

David noted that he read three books during the month; Rose Clark and Ruth Hall by the author “Fanny Fern”. Wondering what the books were about, I searched for them on Google Books and found that both are available for download. So, one hundred and fifty three years after my second great grandfather read the books, I will too.

We leave David’s April 1856 diary entries noting that all the hard work did not produce a lot of gold. As noted before, the spellings here match the writing in David’s tiny pocket diary.

TUESDAY 1, -- Looks rainey and the river is up pretty high. Four years from home to day.

WEDNESDAY 2, -- Cleared up fine to night.

THURSDAY 3, -- Charly dug out a dead man yeasterday. supposed that he had met with foul play. 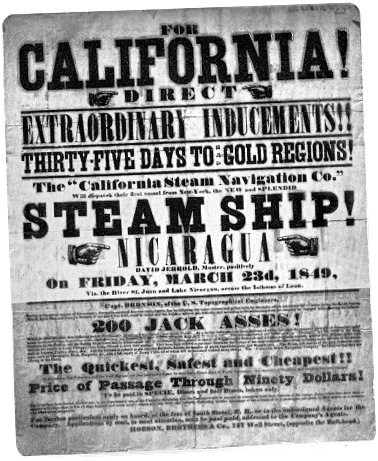 FRIDAY 4, -- John and his partner came down to see us this eavening.

SATURDAY 5, -- Finished the history of England this eavening.

SUNDAY 6. -- Went up to Columbia to day. Find it rather dull a loafing around there all day.

MONDAY 7, -- Shifted sauce to day. The watter was so high in the river that it backed into the boxes.

TUESDAY 8, -- Looks like rain to day. but you can not tell much by looks this season.

THURSDAY 10, -- Rained pretty much all day to day.

FRIDAY 11, -- Commenced raining this afternoon about four o’clock. so that we had to quit. Finished reading Rose Clark tonight.

SATURDAY 12, -- Finished ground sluceing to day and I am glad of it. White and Len went up to the log to miners meeting this evening to make some new laws.

"The log" refers to Pine Log Crossing, on the South Fork of the Stanislaus, about 1 3/4 miles above the confluence.

SUNDAY 13, -- Went up on the Flat to day and bought a Horse of George Collingwood and (paid) him one hundred dollars.

Collingwood was another miner from Massachusetts, living at Shaws Flat, and was listed in the census taken in May, 1851.

MONDAY 14, -- Got my horse shoed to day. cost me three dollars. Hauled down lumber for sluces. to day had to pay six $ and a half per foot.

TUESDAY 15, -- Set up sluces to day and got ready to go to washing. Len bought a horse to day. Commenced Ruth Hall to night.

FRIDAY 18, -- Shifted sluce to day Seth Holmes another Mass boy was down here to see us to day and stoped and got diner.

Seth Richard Holmes was involved in the Stanislaus Tunnel Company. His shares were up for sale, according to an advertisement in the "Weekly Columbian" of December 20th, 1856, presumably because he had failed to pay his assessment.

SATURDAY 19, -- White and Len have gone up to the log to night to a miners meeting. Took out one hundred and eighteen dollars and eighty -five cents.

The "Columbia Gazette" of April 26, 1856, reports that White was elected Chairman for the Pine Log Crossing Mining District at this meeting. This district apparently included the downstream bars down to where White was working.

SUNDAY 20, -- Went up to the flat to day Took diner at Capt Bartletts. Took a ride up to Yankey hill this afternoon.

MONDAY 21, -- Our horses strayed off last night and Len found them up to Jarvis's ranch.

E.S. Jarvis, a `state of Mainer", had a ranch in the vicinity of Gold Springs. This comment and the one about the miners meeting at Pine Log Crossing are two of the good reasons for believing that Drew was mining up near the South Fork. But the horses could easily have strayed up this far from Walker's Bar.

WEDNESDAY 23, -- John and Co were down here last eavening and we had a game of cards for the first time in a good while.

FRIDAY 25, -- Took out one hundred and forty eight dollars and twenty four cents this week.

SATURDAY 26, -- Went down to Jimtown to attend a meeting of the Know Nothing tunnel Company. Took dinner with William Bradford.

MONDAY 28, -- White went to sonora to day. Rained a little this morning.

TUESDAY 29, -- Charly and his Company commenced work on there claim to day.

WEDNESDAY 30, -- Rained a little to day. Shifted sluce this afternoon. Caught a sheep that had strayed down the hill.