Charles Joseph Gordon and Rosa Clara Friedlander Logie joined the Church of Jesus Christ of Latter-day Saints in 1852. She was baptized in England before migrating to Australia with her mother and younger sister. Charles was baptized in Sydney within 30 days of Rosa. Charles spotted the beautiful young Rosa sitting on the second floor porch of the church’s mission home in Sydney. He raced up the rose trellis to meet her before the young men with him could gain access to her by the normal method of knocking on the front door. Charles won both her

heart and her hand and the young couple married shortly thereafter in Sydney. After a short time, they decided to move to Utah where many other members of the church were gathering to escape persecution by other religious sects.

Charles had been a sailor in the routes around Australia, New Zealand and the surrounding islands for about seven years prior to meeting Rosa. He was also a trained carpenter. Both of these skills would prove to be essential in saving their lives as well as the lives of others in the near future. The trip to America would prove to be anything but routine.

Recently, I found a copy of the diary of Captain Pond’s who was the captain of the ship, “Julia Ann” on which the Logie’s and other Latter-day Saints had booked passage.

The diary was written in his later life and some of the ‘facts’ he states do not match other records of the event, but the diary provides interesting insight into the accident. Grandpa Logie’s own memories of the incident do not always agree with those of Captain Pond. Grandpa didn’t have to protect his reputation as a ships captain so perhaps the differences can be partially subscribed to this reason.

This much we do know. The Julia Ann left port in Sydney on 7 Sep. 1855 bound for San Francisco. It hit a reef in the open ocean on 3 Oct. 1855 and sank with a remarkably low loss of life given the location of the incident. Charles had been at the wheel steering the ship until an hour before the incident when he was relieved to get some rest. 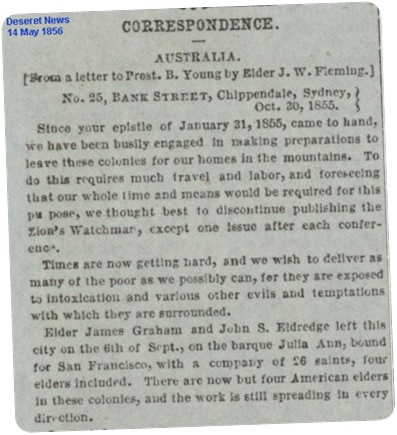 How did the ship hit a reef in mid-ocean on a route that was fairly well traveled? Let’s enter the world described by Pond in his journal:

“Twenty-seven days out, October 3rd, I was on the lookout for land all day, and carried a press of sail, in order to pass certain dangerous islands before night. At that day those seas were very incorrectly surveyed. At one time, bound from San Francisco to Australia, about sundown, we raised a reef crossing our course directly ahead of us, about ten miles long, not noticed or marked on any chart extant. Had we been an hour later, the ship would have been a helpless wreck. About two P. M., we sailed directly over the position given on my charts of the Scilly reefs on which the vessel was wrecked, and on my arrival at Tahiti, on looking the matter carefully up, I found that my calculations were correct, and that the position given on the charts was from 60 to ninety miles too much to windward.”

The ship broke up and sank on the reef, as we know with the loss of five of the passengers. For the most part the sailors and the passengers helped each other abandon ship and get to the reef. However, one husband did not stay with his family for some reason.

“A fearful shriek arose from the cabin, and when I returned not a vestige of my stateroom, or its contents, remained. That resistless sea had stove in the forward part of the cabin washed away the starboard staterooms, with two women and a little child. The poor mother had lashed her infant to her bosom, and thus they found a water grave together. There was a mother with six children; the husband and father selfishly deserted them, and escaped to the reef, before the hauling line parted. I urged the mother to improve the only chance to save her own life. She sobbingly exclaimed, “No, I cannot leave my babes, we will die together.” When the husband and father reached the reef, the sailors inquired where his family was; he replied, “on board the ship.” In their indignation at his cowardly desertion of them, they seized and threw him bodily back into the sea. A friendly wave washed him back again, and they allowed him to crawl to a place of safety upon the reef.“

The situation of the survivors was frightful. They stood on an underwater reef with water up to their waists in mid-ocean. Imagine standing on an unseen footing in mid-ocean with only the curve of the ocean on the horizon and the stars above you in a night sky.

“Our situation of the reef can be better imagined than described. It was about eleven o’clock at night, when all were landed; we were up to our waists in water, and the tide rising. Seated upon spars and broken pieces of wreck, we patiently awaited the momentous future. Wrapped in a wet blanket picked up among the floating spars I seated myself in the boat, the water reaching to my waist, my limbs and arms were badly cut, and bruised by the coral.”

They spent a long night, some in the water and some on a little higher ground above the water line. And then came the morning light.

“At morning’s dawn low islands were discovered, distant about ten miles. Again all was activity. Immediately set about patching the boat, whilst others collected spars and drift stuff to form a raft, on which to place the women and children. A little after sunrise, I started for the land, though our boats would scarcely float.

The first island on which we landed presented a very barren appearance; it was covered with the banana tree; birds were plentiful and very tame, but after a diligent search no water, fruit or vegetables could be found. We proceeded to another, and nothing but disappointment 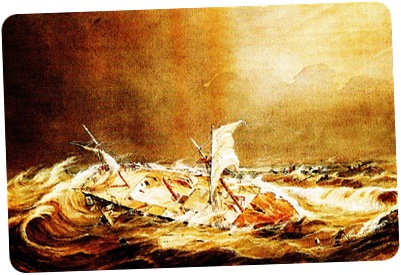 awaited us. Water was madly sought for in vain; and late in the afternoon we returned disappointed and unsuccessful to our companions on the reef. I then placed the women and children in the boat, and sent them in charge of Mr. Coffin to the land, while the rest of us remained on the reef for a second night. A small raft had been found, but not large enough for all to sit upon.

Early on the morning of the second day, Mr. Coffin returned to us with the boat, and I immediately dispatched him again in search of water, for the want of which we were nearly famishing; while the rest of us commenced in earnest preparing a couple of rafts, on which we placed what provisions and clothing could be collected. And about ten o’clock made an attempt to reach the island, by wading along the reef, our boats in tow, the old and helpless men, of whom where were several, being placed upon them. Energy, perseverance and above all, necessity, can accomplish almost impossibilities, and we were successful.“

Charles had handed Rosa over the gun whale of the ship into the hands of one of the sailors while he tied his baby daughter, Annie, to his back with a brown shawl. In the crush of the moment, Charles and Annie were pushed overboard and would have drowned except for one of the sailors. Bully Williams dove overboard and grabbed Charles by his long black hair and pulled he and Ann to the reef. Even though Charles was a sailor, he had never learned to swim and thus Bully truly saved their lives. Deciding they must reach the island, the company started to move toward it. 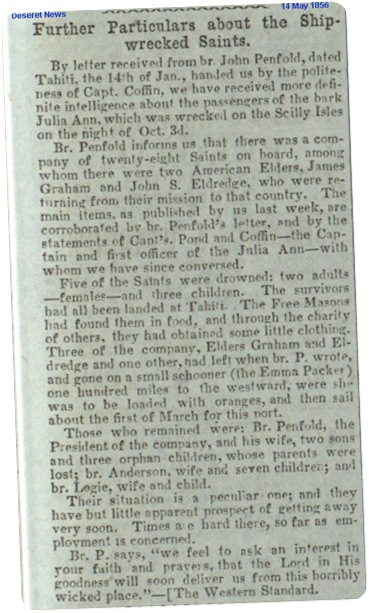 “Most of the water for a distance was deep. In one place, for over a mile, it took us to our necks, the shorter men being compelled to cling to the rafts. Several deep inlets had to be crossed when our best swimmers were called into requisition. In one of these attempts I nearly lost two of my best men. Large numbers of sharks followed in our wake, at one time I counted over twenty, and not infrequently we were compelled to seek safety from them upon the rafts. Late in the afternoon we reached the island, completely exhausted, but our hearts swelled with gratitude as we were conducted by the children to some holes dug in the coral sand on the beach, where they had obtained drinkable water. We had been forty-eight hours in the salt water, two days exposed to the rays of a tropical sun, without food or drink. We never found any fresh water supply on any of the small islands other than by digging; the water we obtained in this was brackish, but fairly good.

The island that we reached with our rafts, and where we made our permanent camp was a low, oblong coral reef, rising just above the surface of the sea, perhaps fifty rods long by twenty rods at its widest point, covered quite thickly with a low tree of the banyan species. Our first great anxiety was a search for something to eat. Remember, we had been literally fasting for forty-eight hours, without a morsel of food. Under such circumstances you may well believe that we were neither very particular nor squeamish. We found the island fairly swarming with a small red land crab, about half the size of one’s fist, not a crab, but we knew no other name, and so dubbed them crab. They were a crawly affair, naturally disgusting to the touch or taste, but they were food to the famishing, and we seized upon them with avidity. In about a week we cleared the entire island, not one more of the creeping things could be found.”

We leave the Logie’s alive but without water, food and shelter on the atoll. Their survival was at question. See the next post for the "Rest of the Story".

I'm thoroughly enjoying your stories of the Logies. I don't know why Charles Logie reminds me of Pa Ingalls; it must be for other reasons than they share the same first name! They both seem to have shared a wonderful sense of humor about everyday life.

Looking forward to the rest of the story!

I left you a little something on my blog. Check it out! http://lindasflipside.blogspot.com/2009/05/one-lovely-blog-award-im-awestruck-or.html

I'm really enjoying reading about my step dads family history and adding it all to my family tree :)

i'm really enjoying reading about my step dads family and adding it to our family tree :)