Shortly after arriving in Lake City, Utah, now known as American Fork, he used his carpentry training to support his family. After being shipwrecked in the South Pacific, Charles, Rosa and baby Annie lived on Tahiti long enough for Charles to earn passage fare to continue their trip to America. 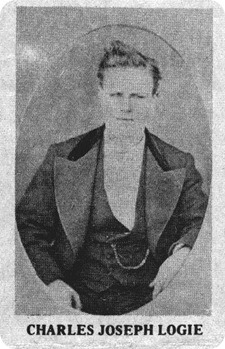 After their arrival in San Francisco, they continued their trek toward Utah. After some tribulation, they arrived in Carson City, Nevada where Charles found work. During their stay there, a son, Charles Joseph was born in 1856. A call from Salt Lake went out for all of the Saints to gather to Utah and the Logie’s took heed to the call and continued their trek to the Rocky Mountains.

After arriving in Utah, the Logie family initially settled in Lehi, living inside the fort. At night, men were assigned to walk around the top of the fort on watch for attacks by Indians. They marched with the typical pattern, gun on shoulder with fixed rotational timing.

Charles didn’t own a gun, so when it was his turn to stand guard, he used a sawed off broom handle that would provide the silhouette of a rifle barrel rising up from his shoulder. The light from the fire and lanterns inside the fort provided just enough illumination to make the broom handle visible yet not identifiable as a stick of wood.

After a short while, in the fall of 1858, Charles moved his family east to the tiny settlement of Wallsburg in Wasatch County. During the warmer months, he would travel down through Provo Canyon by horse and work in Provo, leaving Rosa and the children home in Wallsburg.

Spring always arrives late and winter always arrives early in the high valley area of Wallsburg. After a particularly difficult season with Charles away and after multiple visits and raids by Indians, Rosa had had it with living in the remote location. She gathered up her family and started them walking down the canyon to find Charles.

On his way home for the weekend, he met them half way with a great deal of surprise. Talking Rosa into

spending another night or two in Wallsburg, the family journeyed home to pack up their belongings and move back down to the valley below.

They made their home in American Fork in the Spring of 1859, where a missionary they knew from Australia lived with his family.

The Logie’s spent the remainder of their lives there. They had traveled almost around the world by this time. He from England to Australia and she from Guernsey in the Channel Islands to Australia and then on to Utah.

To earn a living, Charles engaged his carpentry skills and was soon building homes, cabinets and as an extension, caskets. There wasn’t a mortician in town, so to add to his revenue stream and as a service to the community, Charles used the shop behind his home to craft caskets. He lined them with Satin or other fine material to fit the dimensions of the deceased. This activity went on for years until Emil Anderson opened the first mortuary in American Fork.

Charles also built the fence around the American Fork Cemetery. From the History of American Fork, we read: “8 Jul 1882: On the same day, bids of Joseph Elsmore and Charles Logie to fence the City Cemetery at sixty cents per rod were accepted, and the work proceeded with, and on September 9, $55.00 was appropriated to whitewash the newly constructed fence.”

In the last ten years of Charles life, construction projects were far and few between. He entered into partnerships with other craftsmen but eventually each partnership dissolved when the work dried up.

Although life was financially difficult, Charles found a way to support his family. He and Rosa were eventually able to purchase shares in the American Fork Co-op. He sold them in the last months of his life to provide funds for the family.

Charles Logie died of cancer on 12 Jul 1903 in American Fork, Utah. He and his wife Rosa are buried in the American Fork City cemetery, not too far from the fence he helped build twenty years earlier.