Charles Logie wrote letters to his youngest daughter, Beatrice, every week while she lived in the Salt Lake City area.  Beatrice was a school teacher and her most recent contract was in the city.   She came from the small town of American Fork and life in Salt Lake was the first 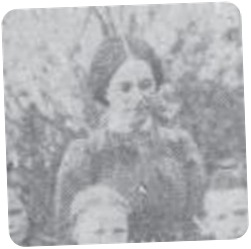 opportunity she’d had to meet a selection of unmarried young men.

Her parents were devout Mormons, who had experienced more untoward events in their lives than all but a small percentage of the world populace would ever encounter.  Beatrice’s most recent letter informed her parents that she’d found a young man that she was considering for marriage.  He did not belong to any church and lived a semi-migratory lifestyle.   The news was extremely unsettling to her parents.  Two of her older sisters had married men who were also not of the Mormon faith and their irreverent lifestyles were a constant source of discomfort to the Logie’s.

Unfortunately, their concern was proven accurate all too soon.  Within a few years of marriage, Beatrice divorced her husband, who, according to the divorce filing, was a habitual drunk who failed to provide any support for her.

Charles and Rosa Logie’s high hopes for the success and welfare of their youngest daughter would be dashed if Beatrice continued with her romance.

We enter their emotional world with Charles plain spoke words to Beatrice:

We received your letter this morning & are pleased to hear that you are enjoying good health.  Your communication has put us in a peculiar situation, you must realize, that we can not know any thing about this man that you speak of & consequently our council would be for you to take time to find out something of his antecedents & what kind of a family he belongs to.  It is not well to jump at conclusions in choosing a partner for life.  People should take time & be well acquainted with each other before making a choice which is to make or mar your future happiness.  Of course we would greatly prefer that you should unite your self with some good member of our church.

Your sisters have all married to please themselves which has caused us much regret for there is a life after this & I fear neither of our sons-in-law give a passing thought to any hereafter.  You say that this man is willing to join our church.  That is a good recommendation if he does so for a pure motive.

I don't want to be considered unkind in my remarks for what I say to you is for your welfare & I consider it my duty to talk plain to you on such an important matter.  Probably I have said enough on the subject at this time but I still think it will be a good thing & not be in too great a hurry to leave the old folks.

Mother says she will send your waist & the belt through the P. Office tomorrow & she hopes you

will have a good time.   Mother says to try & please the trustees so that they will give you a good recommend. If you should ever need one Walter is trying to enjoy himself while he is home.  He says that he don't expect to stay long.  Do you think you will be able to give us a call on Washington's birthday?

There is going to be an Old folks day at our place tomorrow & we are invited.  Mother says do you have far to walk to school now?  Mother is sorry to hear of Mrs. Davidson's death.  There is some talk of letting all the children go to schools in the morning.  Our trustees are behind the times.  They are afraid of the health board.

our Kind love to you & remain your