Mid-October 1900 found Charles Logie sending his daughter, Beatrice’s trunk to her home in Bingham Canyon, Utah. A neighbor was supposed

to take the trunk to her because he was already going to Bingham, but he failed to show up. Charles joking told Beatrice that “I place that trunk on my wheelbarrow and pushed the ‘darned pest’ down to the D. & R. G. (railroad) and paid the agent fifty cents in coin” to send it to her.

As always, his humor is in fine form as he reported on the elementary school students that were in the class of their boarder, Miss Frances 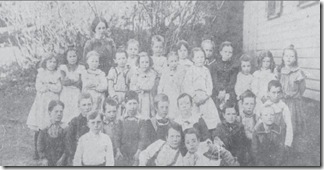 Gailbraith. The trouble maker, “Come Robertson” was put in the “cock loft” (tower class room) along with a “big gang of reptiles” (a larger group of students). They were transferred out of Miss Gailbraiths class so that her student load was reduced to “fifty imps”.

He inquired how Beatrice’s own “magnificent monkeys” (her students in Bingham Canyon) were behaving.

The letter starts with Charles intentional misspelling of American Fork and adding an extra zero to the year. How I’d love to talk to him and laugh at his constant humor.

We read your letter the other day and of cause we have to say we were glad to hear from you. Mr. Jacob Greenwood says he will take your

Valuble Lace so we will give the same into his charge this afternoon. You asked what it cost to send your trunk. Well in the first place the Dame began to inquire over at fat Boleys about a Pedler going to Bingham & after find out that there was such a kind of a person expecting to load up for a few times to see him & ask him if he would take your trunk & he said yes & that he would call for it & so we waited & behold he never called. I then went to the G. S. L. agent & he said that their line did not connect with Bingham so the next morning I placed that trunk on my wheelbarrow & pushed the darned pest down to the D. & R. G. & paid the agent fifty cents in coin & that is the last time that I saw the TRUNK. Well we have new neighbors the honorable Osher Chipman & his Lady have come to live in the big house where Bennetts & the Pom – Pom used to live.

They have awfull times over at the bigh school. They have sent Come Roberson up in the cock loft with a big gang of reptiles. That eases off Galbraith. She has some where about fifty Imps now. They are going to put some darlings in the Teachers room where Grover used to perform & they are going to send to Provo for Josie Snow to take charge of that department. You wee none but B. Y.’s need apply. Eoline Clarke came down last Monday on a visit. She has gone to live with Lisey Hancen. Started down there this morning. Now I don’t know what I can tell you that would be interesting everything remains as it was in the beginning. If you should have occation to write to us. Let us know how you get along with your magnificent monkeys. We are always pleased to hear from you & to know that you are doing well. I am happy to say that we are well at this time & hope this will find you all O.K. Galbraith seems in pretty good trim just now. She had been taking some of my rheumatic powders. Well oh that’s all. I will close with kind Love & best wishes from the Old Home & Remain your afct Father.