Charles Logie started his letter of 7 Nov 1900 to his daughter Beatrice telling her about the presidential election on the day before. It seems that his daughters and grandchildren from Alpine, Utah (the Lace Hat Company) had come down to American Fork to visit and to get the election returns. They didn’t have access to telephone updates in their remote homes in Fort Canyon, northwest of Alpine. 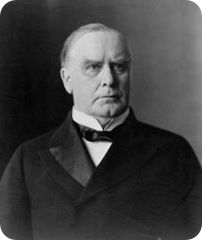 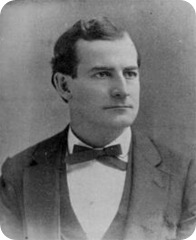 Charles was a Democrat by persuasion. The Republican candidate in 1900 was William McKinley and the Democratic candidate was William Jennings Bryan. McKinley carried the state of Utah, most of the west and all of the northern states, much to Charles’ chagrin.

He described the Republican’s celebrating with a drunken spree all night, an exaggeration that is typical of his description of most things he enjoyed or that were slightly out of concert with his own comfort zone.

American Fork was a Mormon settlement and a night of drinking ‘mash’, dancing and howling’ wouldn’t have been tolerated in the community. Folks there were just simple farmers trying to keep food on the table in a less than desirable farming climate. By the end of the day, most folks were too tired to do anything but cleanup, get dinner and go to sleep.

His wife, Rosa, wanted to go north to visit Beatrice, but couldn’t due to the impropriety of leaving him home alone with their school marm renter, Frances Gailbraith, even though Charles was 71 at the time.

Charles describes bad weather, then mentions the newly elected McKinley and then immediately mentions a storm coming again. Did he equate the two? If so, it showed his typical humor but if not, he missed a great opportunity.

He closes this letter with an “S.P.” (i.e. P.S. – again more humor aimed at his school teacher daughter) noting that at times he has to insert a word or rearrange them so that his letters are more readable. This didn’t mean he eliminated the purposeful misspellings or dry humored phrasing, just that his mind worked faster than his hand could write. Here’s the letter transcribed as he wrote it.

Your letter duely arrived yesterday & contents seen to. We would have answered yesterday but the Lace Hat Company came don in the Afternoon with some of the little Treasures & it seemed rather imposible to steady a persons nerves to compose a letter when there is such a confution. They came to see how the Election would come out & stayed until about ten Oclock. I suppose you that knew Bryan is snowed under. The Repubs had a regular drunken spree all night & are not over it yet. They made a big bon fire in our street & danced & houled & shot off laint powder mash of the night & many of them are kicking up hell today. Mother says that she will try to visit you next Monday if the weather is fine & if she can get one of the mountain Girls to come & attend to the house hold duties for her. For it would not be deacent for me & the school marm to be left alone. But she says it will depend a great deal on the weather. Can’t come if it storms. Many thanks for the check. We sold it to Jim for five democrat dollars. Well I don’t know of any thing more this time. Everybody is talking McKinley today. It looks as if it was going to storm. Mother says she will tell you all the latest news when she sees you. We us & co. are all well as far as I know & hope this will find you like wise. I will now conclude. We unite in sending our kind love & best wishes to you & remain as ever you affect Parents

S. P. I sometimes miss a word when I am writing & have to try & put it in after words & sometimes it is troublesome to place the word on the right place.